MEMO 98 has had a long track record of media monitoring during the elections in Slovakia as well as internationally. Our first report, published on 31 January, analyzed the period from the announcement of the date of the elections to the Slovak National Council (i.e. the Slovak parliament) on 5 November 2019 until 26 January 2020 and focused on Facebook and Instagram, where we monitored the activity (the number of posts) as well as interaction (the total number of reactions, comments, and shares) of political parties, their leaders and top candidates. We decided to monitor Facebook and Instagram with regard to the global trend of the increased influence of social media during elections.

Since we wanted to have the most precise and updated information about all the sources that people in Slovakia use to obtain information about domestic politics, we ordered an exclusive, custom-designed survey from the Focus agency which was conducted in the second half of January 2020.

The poll results show that the majority of the population draws information about domestic politics most often from TV, mentioned as the top-of-mind (indicated as the first) source by as many as 52% of respondents. Within the broad category of TV, the most frequently mentioned TV channels include TV Markíza and RTVS. TV Markíza was mentioned by one-third of interviewed respondents (33%), for whom the TV, in general, is the primary, most frequently used source of information and RTVS was selected by 28% of the interviewed respondents. One in five respondents (19%) mentioned TV JOJ (19%) and 12% indicated TA3. 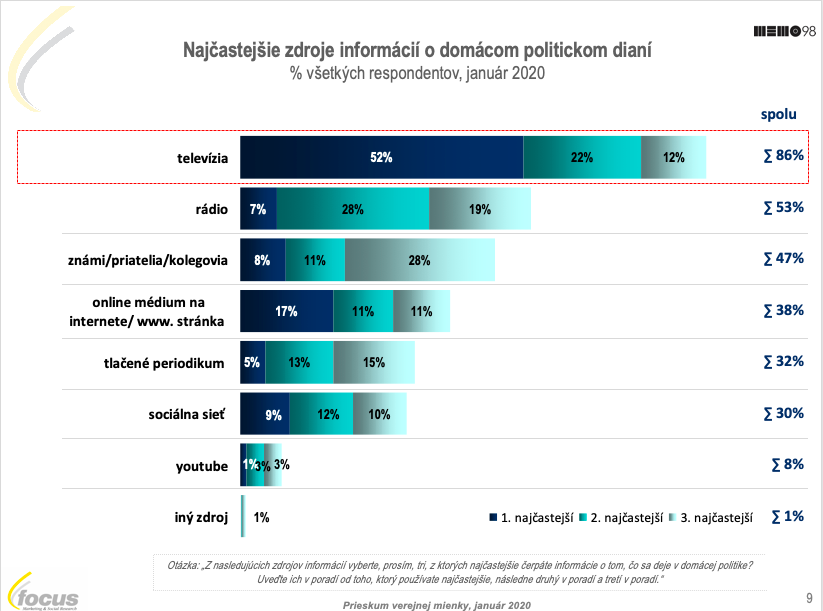 Online media (web pages) represents the first most frequently used source of information about domestic politics for 17% of respondents. These interviewed individuals most often get information from aktuality.sk (27%) website, followed by sme.sk (10%), topky.sk (9%) and denníkn.sk (7%).

9% of respondents indicated that their primary most frequently used source of information about domestic politics are social media networks. Facebook is the dominant leader within the category of social networks, mentioned by an overwhelming majority of respondents (99%). When it comes to YouTube, only 1% of the interviewed mentioned this channel as the first source if information about politics.

If we look at the sources of information about domestic politics from the perspective of socio-demographic characteristics, TV is indicated as the primary source of political information mainly for older people (as much as 95% in the age group 65+ and 94% in the age group 55-64). The situation is similar also in case of obtaining information from the radio (84% and 68% in the two oldest age cohorts) as well as in case of getting information from friends, acquaintance and colleagues (both age groups 55%). On the other hand, online media as a source of information is used predominantly by younger and middle-aged people (largest share in the age category of those aged 25-34: 55%). When it comes to social media networks, this source is most preferred primarily by the youngest monitored group of those aged 18-24 (as much as 65%), while this is also the group of the most frequent users of YouTube (25%) as a source of information. 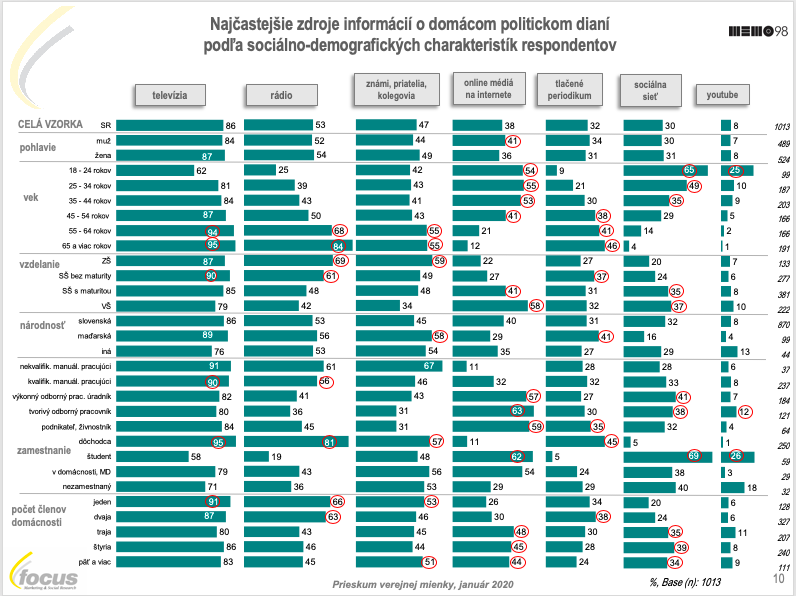 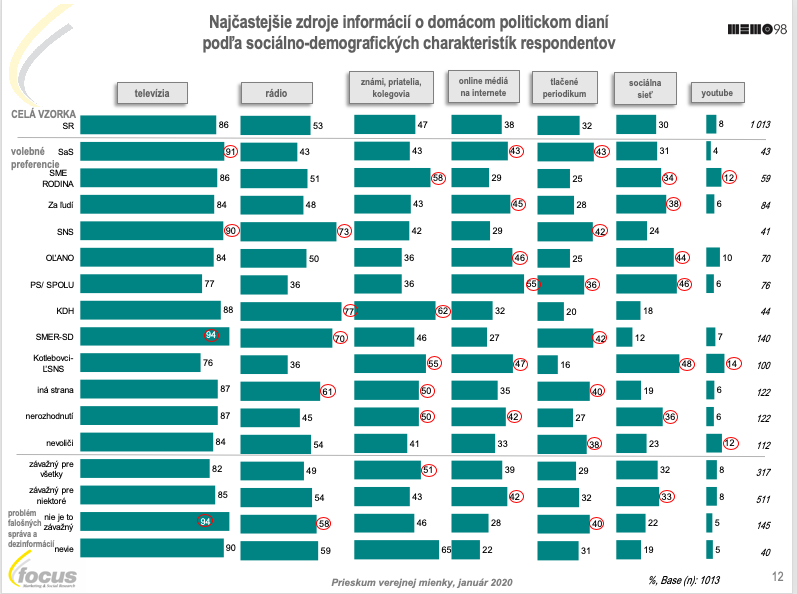 Given the survey results and the context of the upcoming elections, we decided to monitor nationwide TV channels, online versions of the selected media as well as the key social networks.

Our second report evaluates presentation of the political parties and movements as well as their leaders running in the elections in the main news programs of the nationwide TV channels – RTVS, TV Markíza TV JOJ, and TA3 –  during the three weeks of the campaign starting from the mid-January to early February (14 Jan – 3 Feb.).The report simultaneously offers an analysis of the media coverage of some other political stakeholders (the president of Slovakia and the Slovak government). The criteria on which we focused included airtime the individual channels provided to the respective parties and other political stakeholders as well as the tone (positive/neutral/negative), in which they were presented.

When it comes to the parties running for the elections, those with most media coverage in total were the members of the incumbent government - SNS (14%) and SMER-SD (13%) – SNS in TA3 and in the public broadcaster RTVS, while SMER-SD in private TV JOJ and Markíza. All other parties received less than 5%.

When it comes to the tone of coverage about contestants, most of it was neutral. We also registered a significant share of critical information – as much as 55% information about Kotlebovci-ĽSNS was negative (in TV JOJ it was 72%), 27% for SMER-SD and 22% for SNS. Among the TOP 10 most covered parties, only SaS had a larger share of positive than negative coverage.

Several widely relevant social topics and issues dominated the monitored period – Investigation of the murder of journalist Ján Kuciak and his fiancée Martina Kušnírova (this topic dominated on every TV channels, in total it had 14% share across all channels, with the largest one in TV JOJ – 21% and the smallest in TA3 – 9%).

When it comes to the election campaign and its respective aspects, clearly the most substantial coverage across all TV channels was dedicated to the actual process of the campaign (the campaign – topics, messages): a total of 82 minutes (7%). The campaign was the second most intensively covered topic.

In general, the election campaign was more intensively covered only in the news of TV Markíza, which dedicated almost 70 minutes to this topic (roughly 3.5 minute a day). This TV channel covered 8 various campaign aspects, the largest number across all TV channels. Among these aspects, the most intensively covered one was the campaign – topics, messages (more than 31 minutes) – in total, it came third in the news of this particular channel.

In RTVS, there were 6 election topics in total (total airtime around 39 minutes). TV JOJ and TA3 brought information about 5 aspects related to the campaign (in total, 26 and 21 minutes respectively). The public nationwide RTVS and private TV JOJ also dedicated most of their airtime to the campaign – topics, messages (19 and 18 minutes respectively) – in TV JOJ, this was actually the second and in RTVS, the third most frequently presented topic. In summary, TA3 dedicated the least airtime to the campaign and its most frequently covered topic (the campaign – topics, messages) only made it to the 6th position among all other topics covered by the TA3 news.

During regular political discussions on RTVS and mainly on TA3, SMER-SD and SNS clearly dominated – in RTVS, SNS was the most frequently invited party (5-times), while the PS/Spolu and Za ľudí parties, with long-term higher ratings in opinion polls only 4 times when combined. In TA3, the ratio was 22:4 (13 representatives of SMER-SD and 9 representatives of SNS). 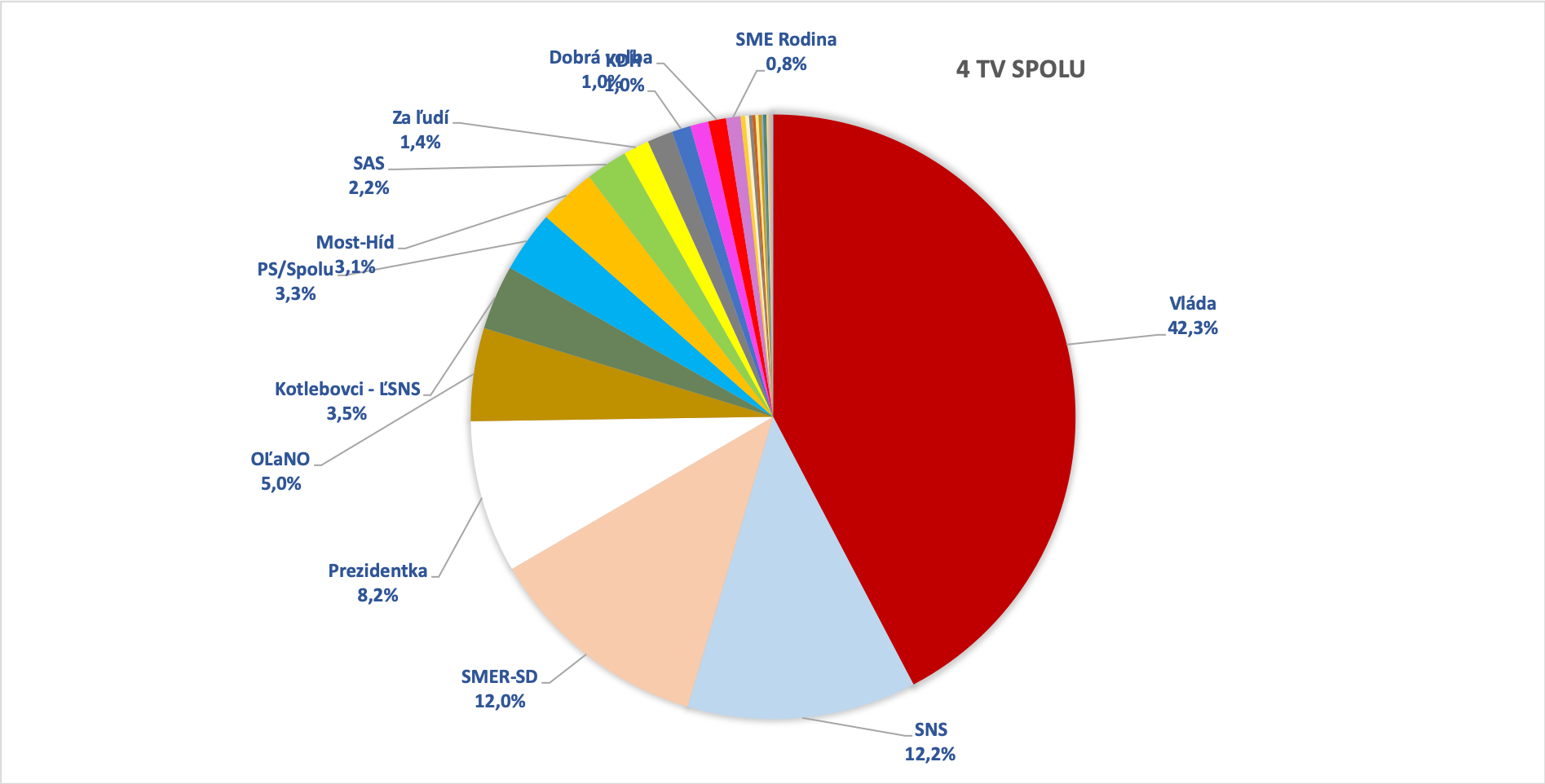 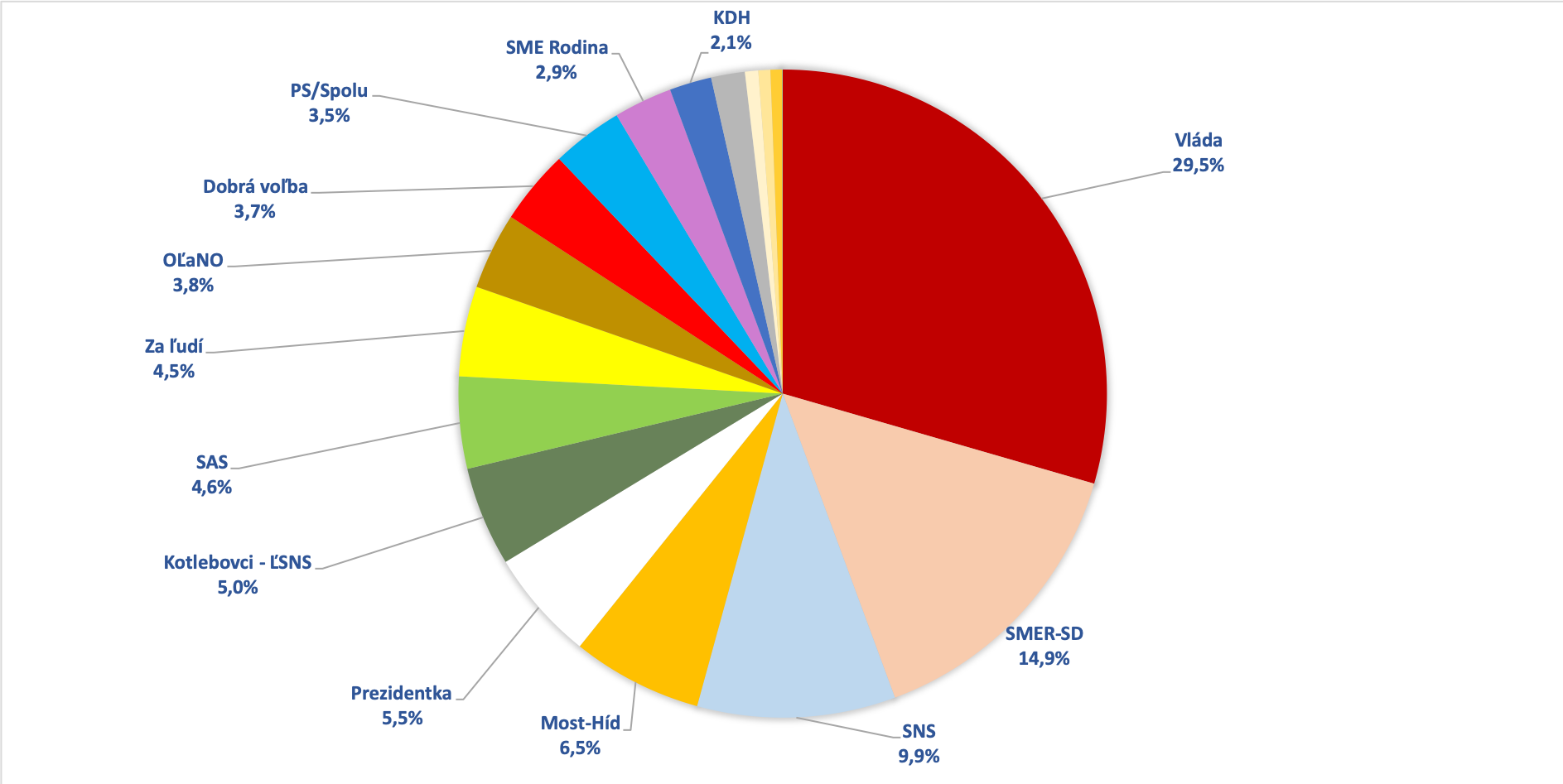 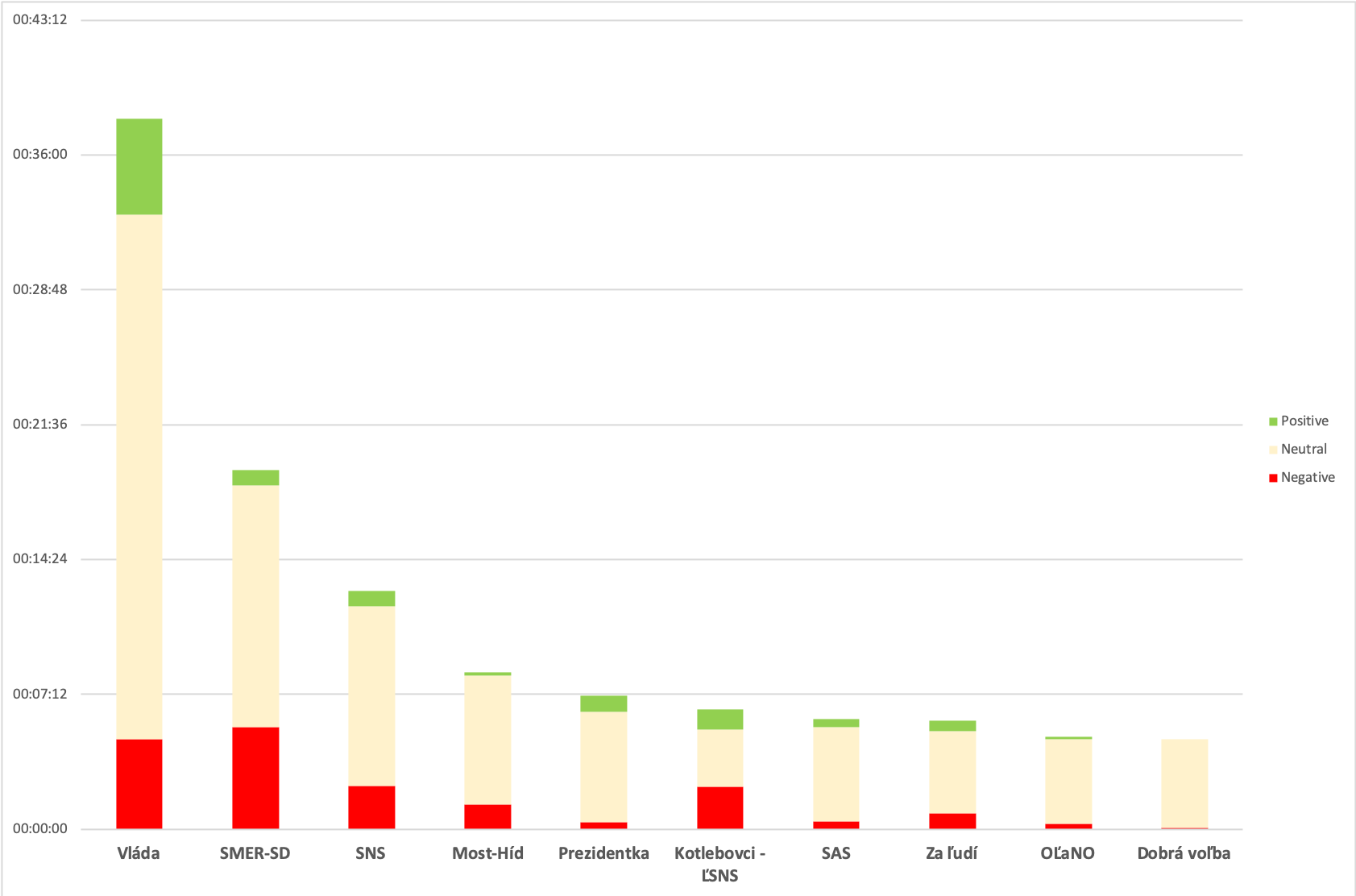 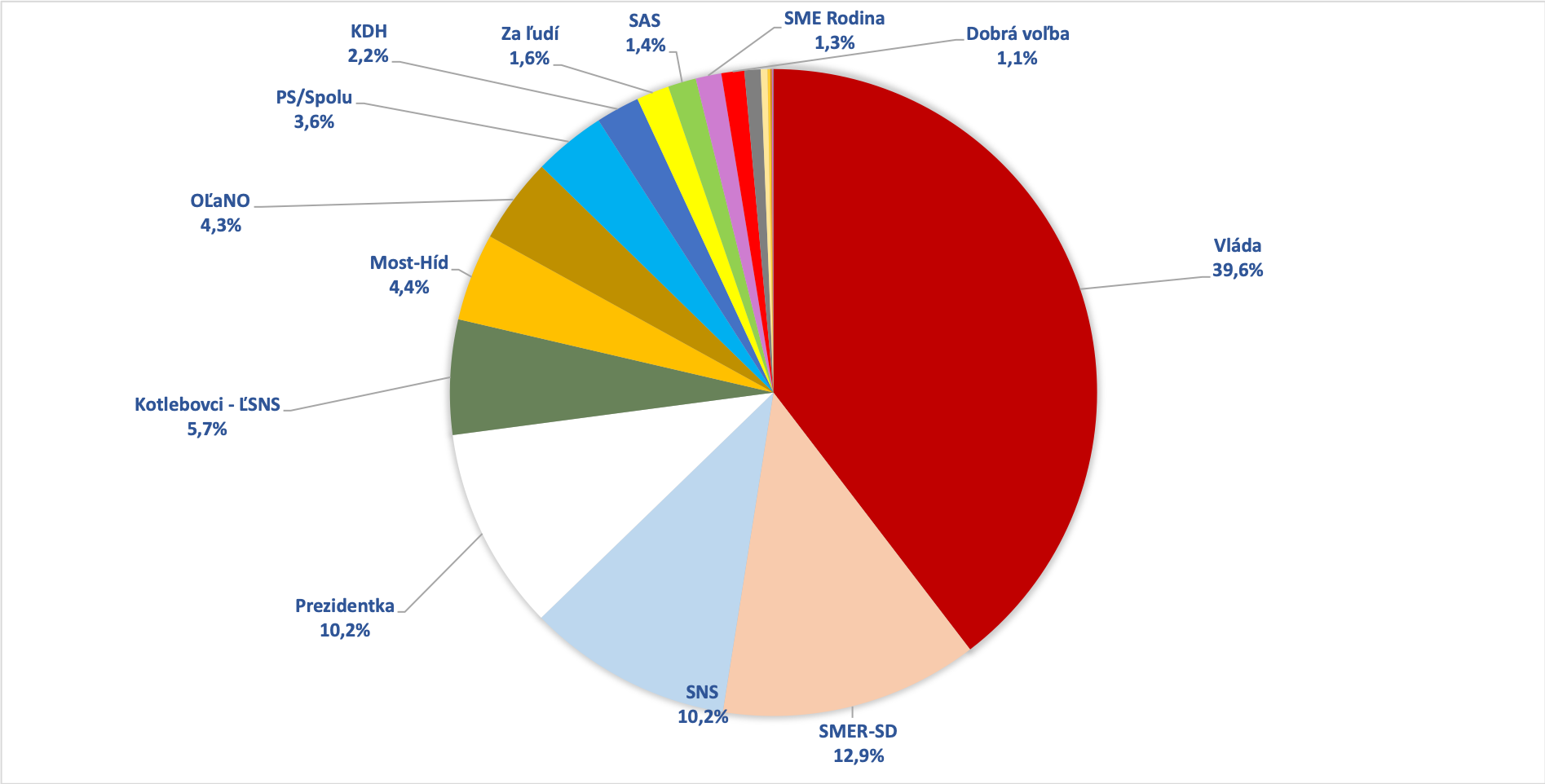 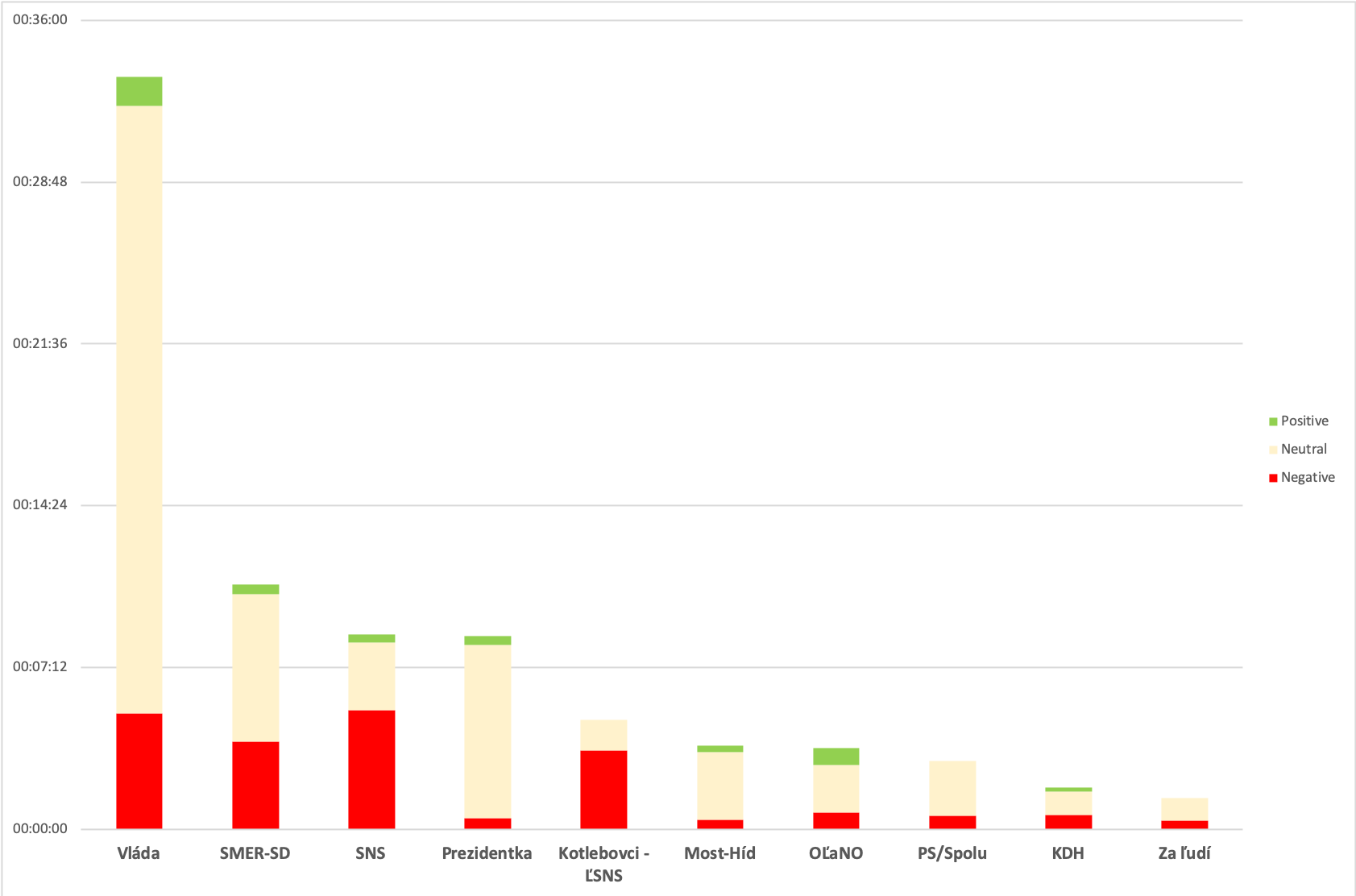 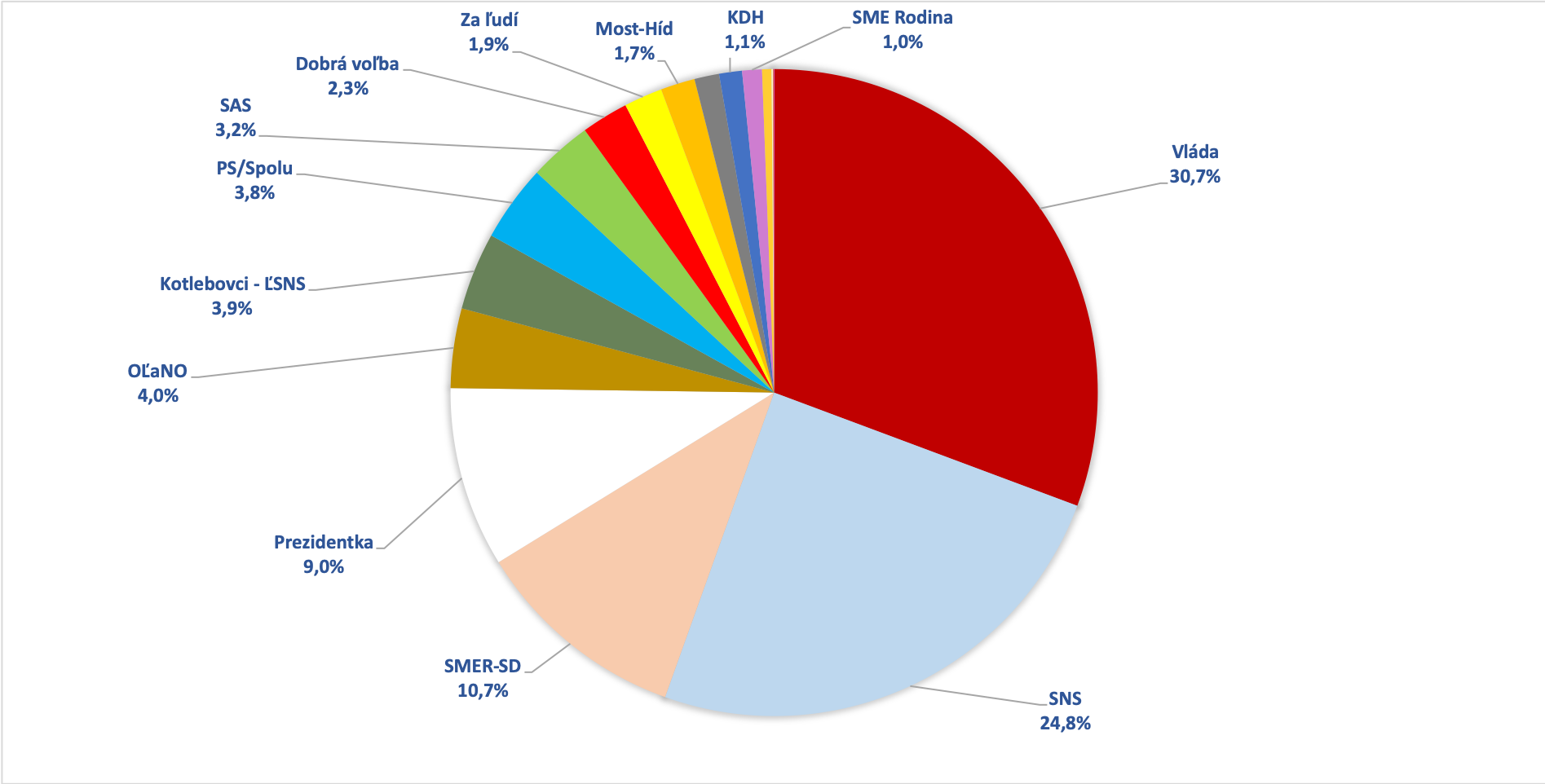 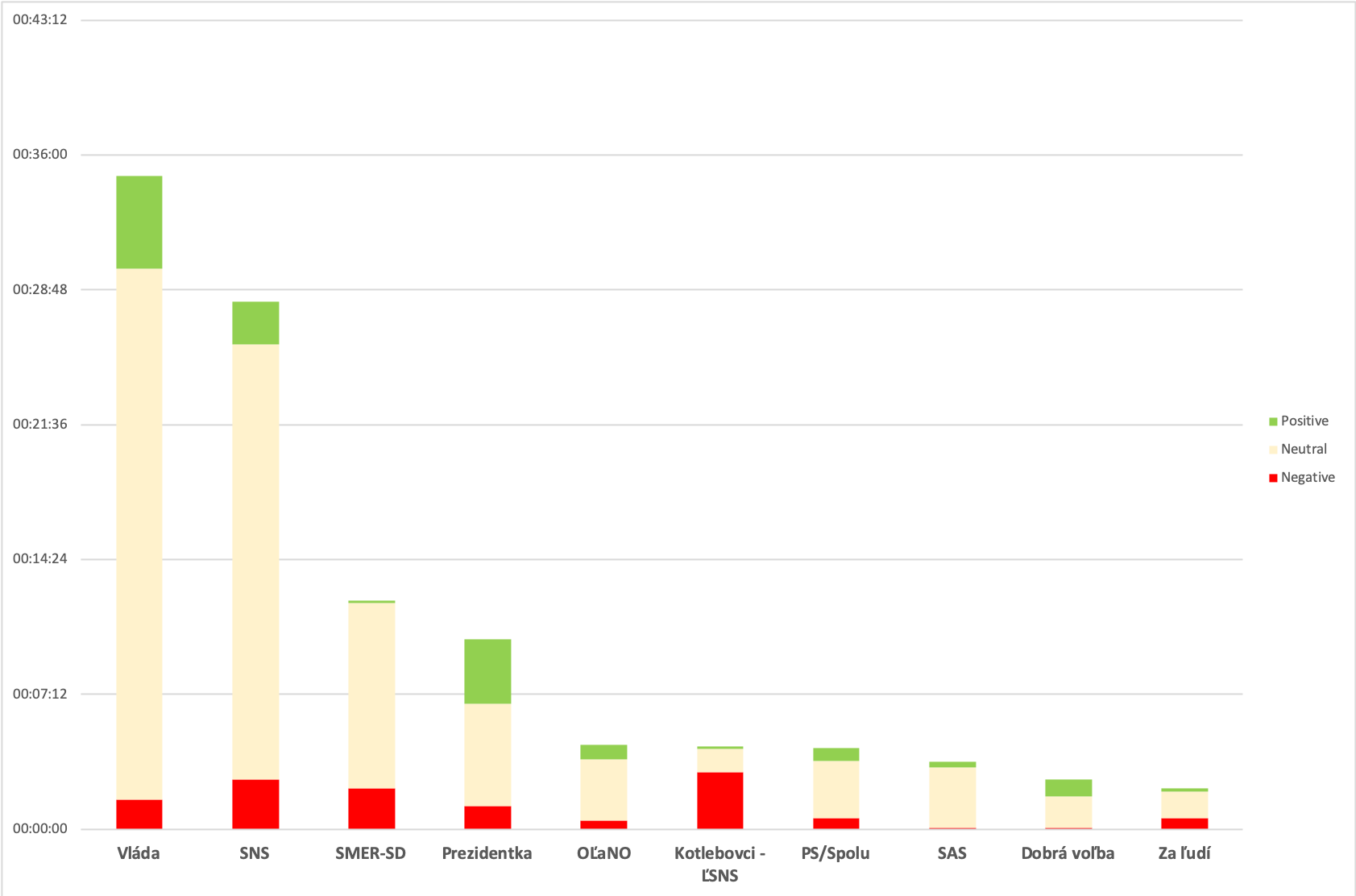 The full monitoring report can be found here m98_report-final-version