Between 1 September and 11 October 2019, Political Accountability Foundation (FOP), in cooperation with MEMO 98, monitored 74 public Facebook accounts of political parties, election coalitions, politicians, media and other influential actors involved in the parliamentary elections. The main goal of the monitoring was to evaluate the importance of Facebook (FB) during the elections and the potential impact of the messages disseminated through this social platform on election integrity. Moreover, the monitoring tried to evaluate what topics and narratives were presented by political actors and others on their public Facebook accounts in the run-up to the election and which one of them generated the highest level of engagement (comments, shares, and reactions, see also the section on methodology).

The monitoring was organized in the framework of a project carried out by Democracy Reporting International (DRI) and MEMO 98 and funded by Civitates. The project seeks to significantly step up a real-time understanding of social media dynamics by providing a toolkit for social media monitoring in elections which is to be offered to observer organizations across the EU and beyond. The project builds on the methodology that DRI and other experts developed in the context of Supporting Democracy, an EU project. Facebook was actively used by almost all monitored election stakeholders. There was no major party registered for these elections which would not have its official FB account. As many as 8.848 posts uploaded by 74 selected actors on FB were analysed between 1 September and 11 October.

Our monitoring of Facebook focused on the set of actors who are important in the context of elections but did not go beyond the chosen four categories - politicians, parties, traditional media, and influencers. While we did monitor the traffic of posts related to all monitored actors, we did not focus on unofficial or private accounts which have been used in other countries to spread disinformation during elections.  Our monitoring showed that Facebook was an important platform of communication in the election period with diversified content ranging from text to pictures, multi-modal drawings, and videos. While the monitored FB accounts refrained from using disinformation, many of the monitored actors used harsh criticism and vilification of their political opponents which contributed to further polarization of the Polish society.

The monitoring results indicate that as many as 2.265 posts (little more than 25%) were assessed by monitors as not having either direct or indirect links to elections and thus were classified under “other issues”. Among the topics and narratives related to elections, 2.221 posts (25%) were devoted to mobilization of voters, 573 posts to “Elections in Poland”, 319 posts to “Discrediting of the opposition”, 224 posts to “Rule of Law” and 195 to “Economy”. When it comes to the mobilisation of voters, here we could find announcements of meetings and rallies as well as references and links to speeches given by party leaders during these meetings with voters. When it comes to monitored accounts of traditional media and influencers, there was not a single narrative that had a dominant position. Among the most present were “the political scandals of the government”, “discrediting of the opposition”, “economy” and “elections in Poland”.

Other discussed topics and narratives included issues related to taxes (raising and lowering taxes, extra taxes on fuel, withdrawing the obligatory payment for social security [ZUS]), health care (government’s plan to introduce new laws aimed to improve the system, opposition agenda related to healthcare and its systemic failures), social issues (additional pensions, 500+). There was a different approach to use individual accounts of political parties vs. account of the coalition among different coalitions. While in the case of Lewica Razem, for example, the most active was the FB account of the coalition, in the case of Koalicja Obywatelska or PSL Koalicja Polska, more active were accounts of individual member parties, like Platforma Obywatelska or PSL.

In general, Facebook public accounts were used as an additional channel to disseminate campaign-related information and to reach voters with specific narratives. From 1 September until 11 October, the monitoring team analysed 19 FB accounts of political parties and coalitions running in the elections. The highest number of posts during the monitoring period was posted by the ruling party Law and Justice (PiS - 338 posts), followed by the Democratic Left Alliance Lewica Razem (SLD, 309 posts), Civic Platform (PO, 253 posts) and Konfederacja (243 posts). The Civic Coalition (KO), which came second after PiS when it comes to the election results, posted only 26 posts in the monitoring period. As it was already mentioned, in the case of KO, it was individual member parties as well as public accounts of KO politicians which were more active than the official FB account of KO. As for the number of followers of the monitored accounts of political parties (at the time of the data scrapping on 1 September 2019), Kukiz15 had the biggest number of them (283,050), followed by PiS (225,857), PO (190,499) and Partia Razem (122,838). 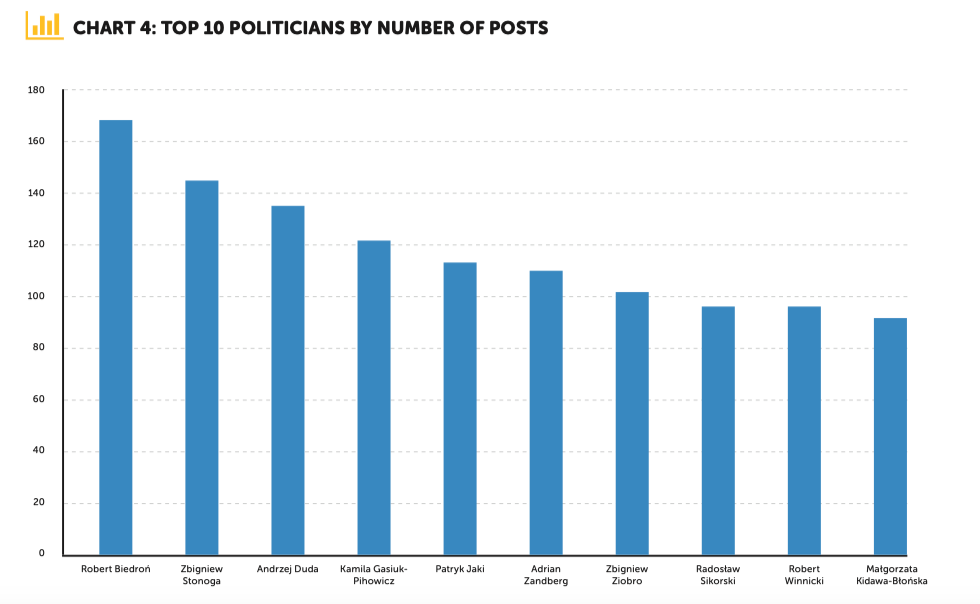 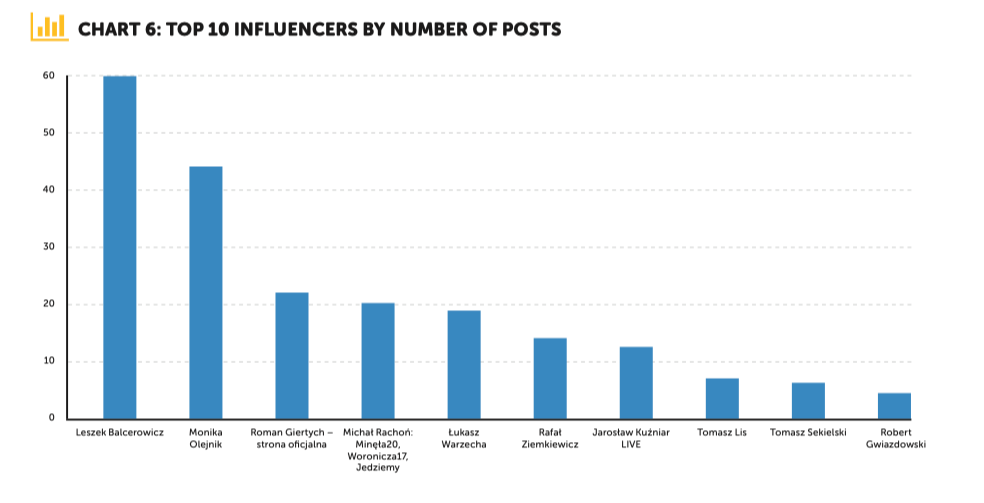 The full report can be downloaded here: m98_fop_report