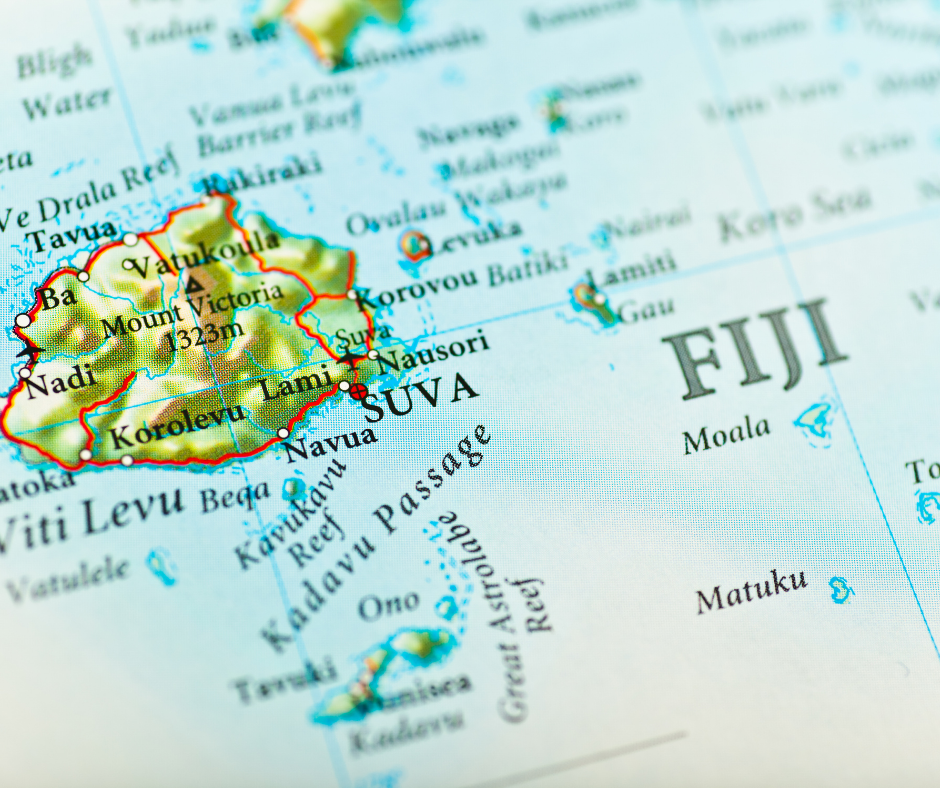 Much remains to be done to achieve equal participation of women and men in politics. The same applies to debunking gender-stereotyping and misrepresentation of women in media content, tackling the challenges faced by women in the media industry, and the risks facing women journalists. While there have been a number of reports looking at how women are treated on social media, it still struck us to find out how badly women of Fiji are treated on Facebook. As a pilot effort, we worked with International IDEA, an intergovernmental organization with the mission to advance democracy worldwide, to analyze how women politicians are treated on social media in Fiji. Our main objective was to evaluate how women politicians are treated in social media posts and comments. We reported the preliminary findings already last year in this article as well as in the framework of the accompanying webinar.

For a summary of the main findings, you can review this video from the webinar

We conducted the monitoring was conducted retroactively and focused on three time periods: (a) 15 September to 14 November 2018, the two-month period prior to election day in 2018; (b) 15 November to 13 January 2019, the two-month period after election day; and (c) 15 October to 13 December 2020, the two-month period closest to the conduct of the monitoring. Therefore, for six months, 17 public pages of the 12 most prominent women politicians, 28 public pages of 24 male sitting members of parliament, 2 public pages of social media influencers, 1 public page of a media entity, and 6 public groups were monitored and analyzed. The research was carried out using public data provided by Facebook—as the most popular social media platform—using the CrowdTangle tool, which provides access to public groups and pages. As CrowdTangle only tracks public content and does not monitor private personal profiles or private groups, we decided to focus on public pages (accounts) and groups.

Women are under-represented in Fijian politics but a record number (10 of the 51 available seats) was elected to parliament in 2018. At the same time, however, women’s representation in leadership positions, up to and including party leaders, has significantly decreased. The monitoring focused on the public pages of women and men in politics, social media influencers, media outlets, and public groups on Facebook. The main objective was to evaluate how women politicians are treated in posts and comments. Posts and comments were classified as ‘problematic content’ when the authors used sexist, racist/ethnicity-based, threatful, politically victimizing, or individually abusive language.

• Of all the problematic content (both posts and comments), the highest proportion (47.2 percent) took the form of political victimization, where abusive or threatening comments targeting political beliefs, ideology or affiliation were directed at the politicians.

• No problematic content was identified in the posts by the women politicians, whereas 35 problematic posts were found on the pages of their male counterparts. This means that none of the women politicians monitored were perpetrators of problematic posts. Female politicians were less inclined to raise controversial issues or openly criticize their political opponents in their Facebook posts. By contrast, men expressed their opinions more openly and were sometimes more critical of their political opponents. 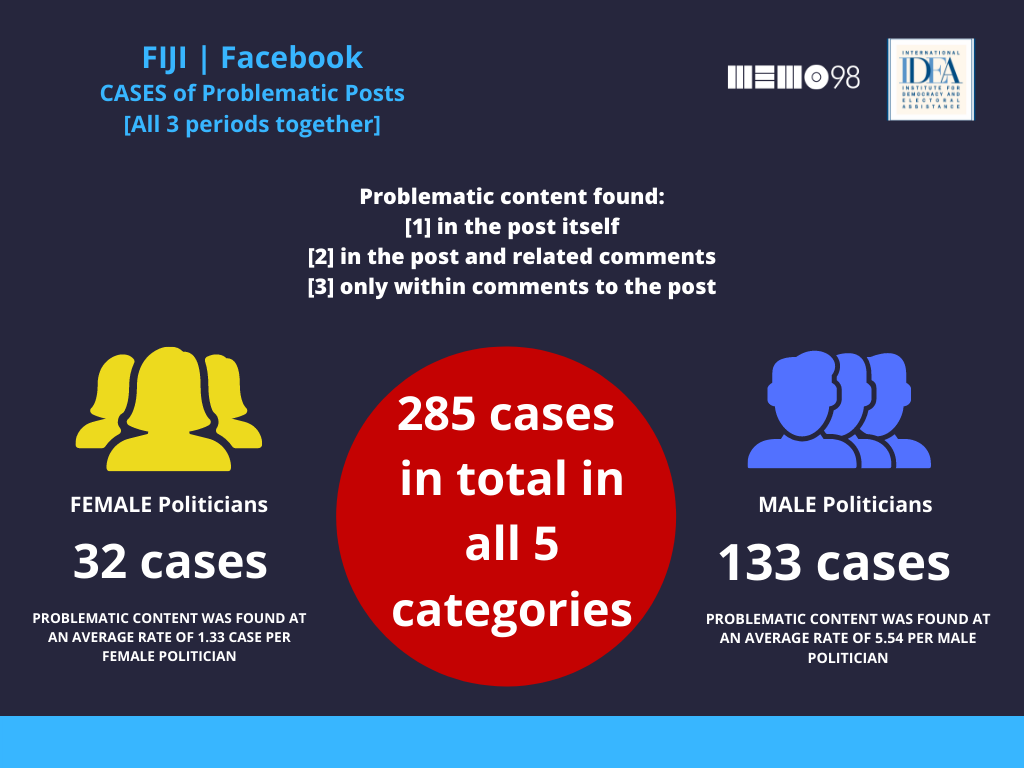 • Political victimization was the most common problem in the posts (see Figures 3 and 4). In 41 (47.2 per cent) of the 87 posts a problem was identified with the post itself. It is notable that two-thirds of these cases were targeted at men (31 compared to 10). The next most frequent problem was sexism, which was noted in 15 of the 87 posts (17.2 per cent), while personal abuse and racism (all against women) were each identified in 9 cases. 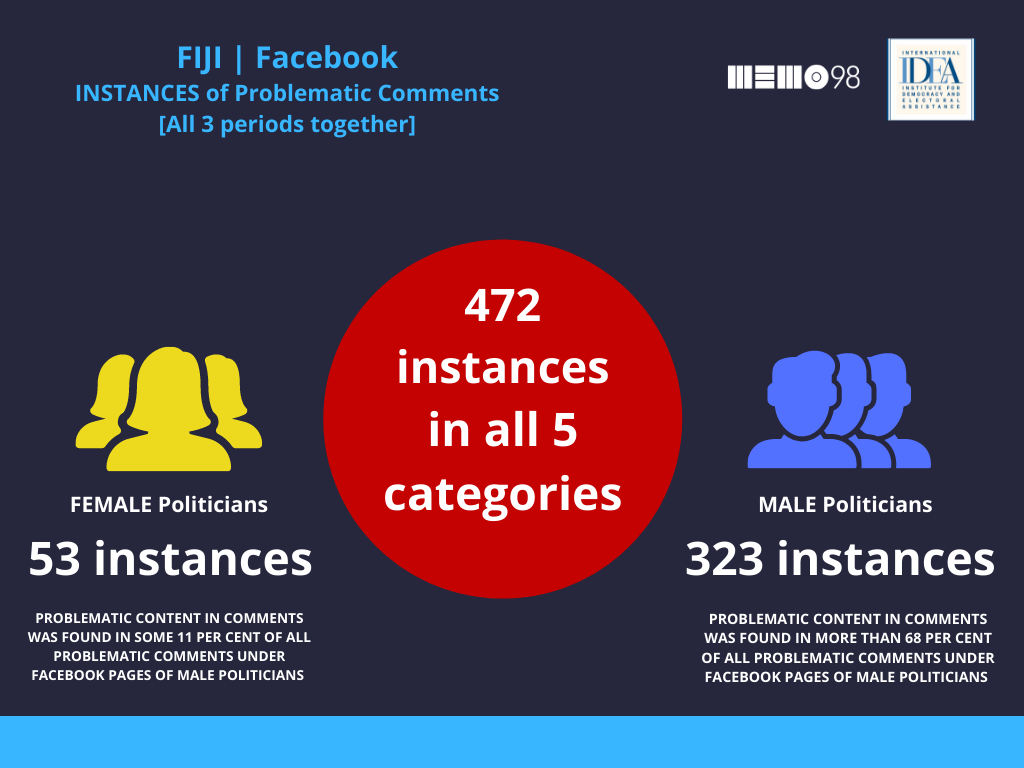 • In the comments, personal abuse was the most typical problem. There were 216 such cases (45.8 percent) out of a total of 472 problematic comments (see Figures 5 and 6). Almost 90 percent of these cases were attacking men (190) while women politicians were attacked in 26 cases. The second most problematic category was racist/ethnically or nationality-based comments (135), which made up 28.6 percent of all the problematic comments. Once again, around 90 percent of these (123) were targeted at male politicians. There were also 69 sexist comments (14.6 percent).

• In a small number of cases during the monitoring, women politicians became the subject of smear campaigns, sexism or racism on Facebook. The most notable cases were those of Lenora Qereqeretabua, Riddhi Damodar, and Lynda Tabuya (see below).

• Compared to their male colleagues, female politicians are treated in a less serious manner on Facebook. Comments on their posts touch on their appearance and/or personal qualities rather than their politics. In addition to the smear campaigns against the three women politicians mentioned above, there were a large number of stereotypical or sexist comments about the women, including about their appearance. 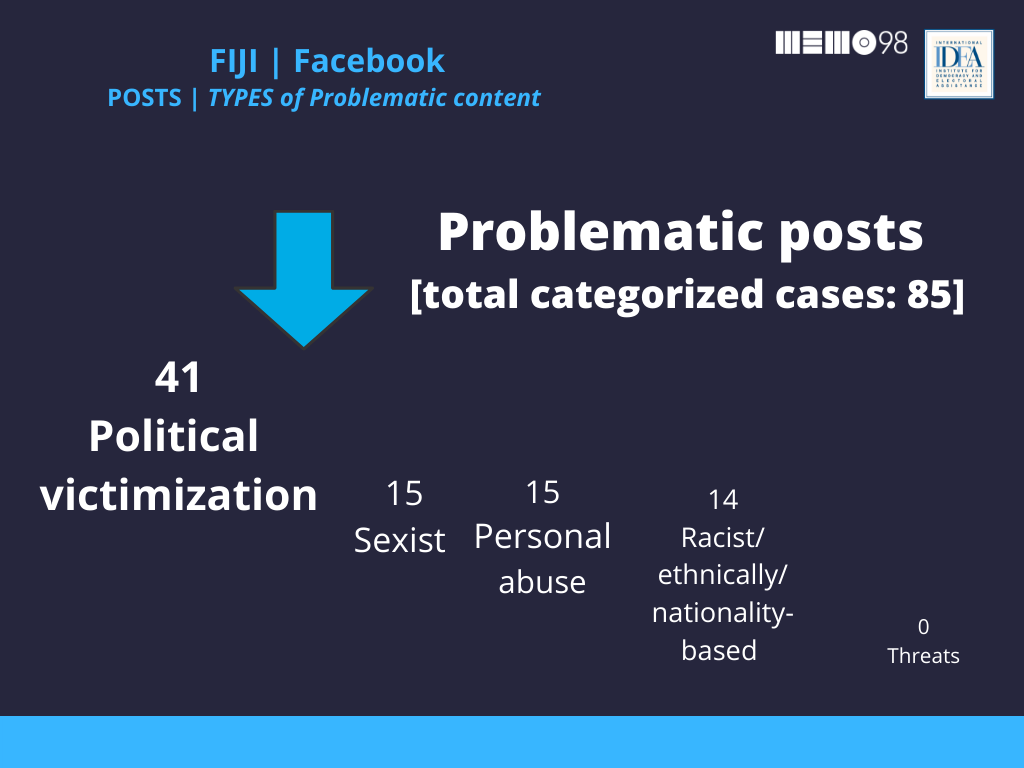 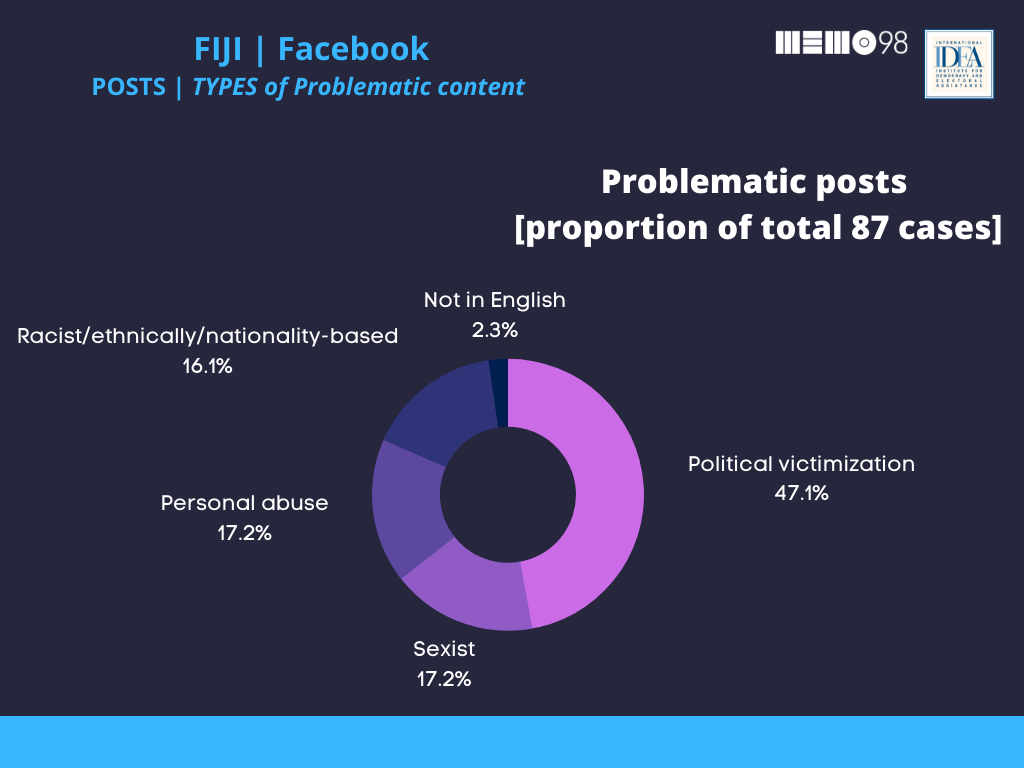 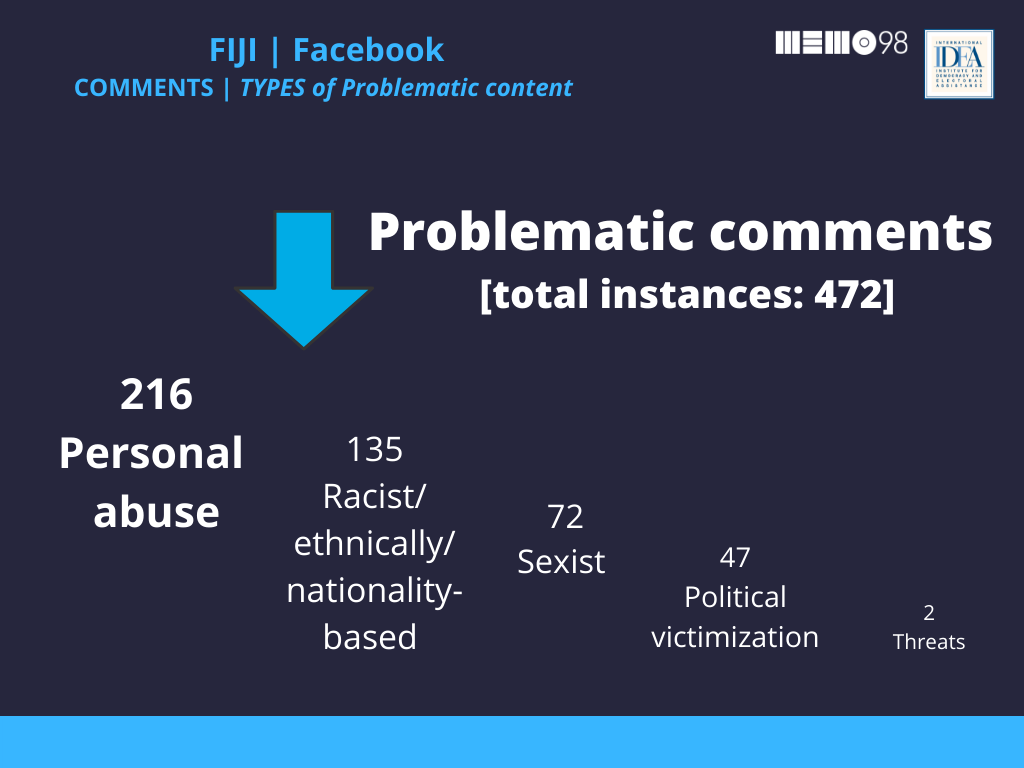 Figure 5. Types of problematic content in comments, by number 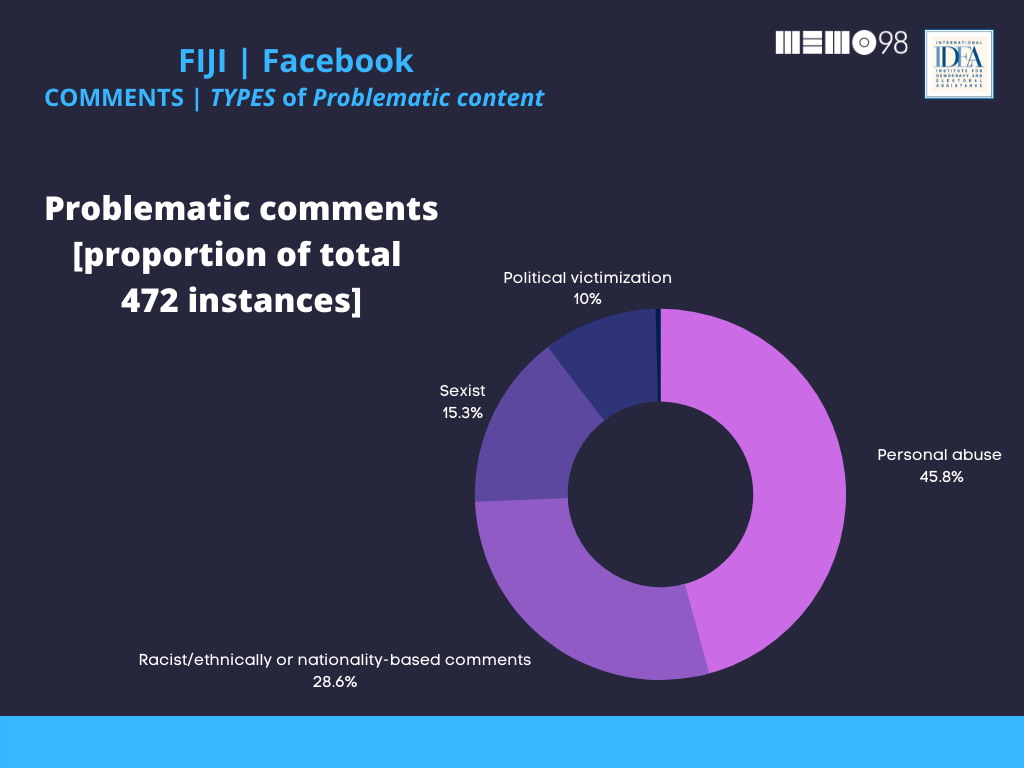