While not winning on social media, Japarov takes the presidency

Monitoring of the Kyrgyz snap presidential election showed that Sadyr Japarov was outcompeted by other candidates on social media but that did not stop him from winning a landslide victory. The research, conducted by Media Development Centre, a Kyrgyz media organisation, and MEMO 98, a Slovak non-profit specialising in media-monitoring, looked at Kyrgyz social media from November through January. The monitoring included 65 different actors – candidates, politicians, political parties, influencers, media outlets, official authorities and public groups – with accounts on Facebook and Instagram.

There are an estimated 2.5m social media users in Kyrgyzstan – approximately 40% of the population – 2.1m on Instagram and 610,000 on Facebook. Despite Instagram’s larger audience, we saw higher activity on Facebook pages, with 17,795 posts in the period, compared to 8,038 on Instagram. However, Instagram posts saw close to nine times as many interactions, with more than 20 million engagements to Facebook’s 2.2m.

Sadyr Japarov, who was catapulted to the prime minister’s chair from jail by the violent protests last October, posted four times fewer posts on Facebook than Abdil Segizbaev, who was the most active among the 16 monitored candidates, with 177 posts. While Japarov posted only 44 posts, they generated as many as 30,990 interactions – only some 13 thousand less than Abdil Segizbaev, whose posts generated over 44 thousand interactions. Of the nine monitored public groups, the most active one was the one in support of Japarov. Of the political parties, the Reform Party posted almost twice as many posts as Chon Kazat but did not reach the levels of engagement of Chon Kazat.

A different story played out on Instagram, where Japarov was the second most active candidate, trailing only behind Eldar Abakirov (18 posts). Rashid Tagaev was third in the number of posts. In terms of interactions, Japarov’s 12 posts generated 14,861 engagements but fell behind Myktybek Arstanbek (16,793 interactions to his 6 posts).  Chon Kazat, Reform Party, and Butun Kyrgyzstan were also active as parties.

Of the 16 candidates with an official presence on Facebook or Instagram, most used advertising on Facebook-owned platforms. Two candidates – Aymen Kasenov and Babur Tolbaev – were the most active in using paid ads, running 50 and 27 spots, respectively. The total amount spent on this election (around 11,500 USD) was significantly smaller in comparison with the funds spent on online advertising prior to the 2020 parliamentary elections.

In terms of media, Kyrgyz Today was by far the most active during the monitoring period (3,541 posts), followed by 24.kg (1,645 posts) and Jetinchi TV (1,576 posts). News.kg was the most popular outlet, with more than 2,5 million interactions, followed by Radio Azattyk (471,690) and Kabarlar News (193,196). Eight media outlets provided their online audience with some coverage of presidential candidates and two of them - Next TV, and Azattyk - offered some noteworthy coverage, presenting eight different candidates, mostly in a critical tone.

Commenting on the report, Nurjan Musaeva of Media Development Center said: “The research shows there was an active and engaged audience on social media, particularly on Instagram, but few candidates made it a focus in their political campaigns. Similar to the parliamentary elections, we did not see highly professionalised digital operations or significant spending on advertising, which are now commonplace in elections over the world. Given the socio-political context in the country, the role of traditional media and the fact that online popularity does not automatically translate into election victory suggest that social media may not be yet the key to winning in Kyrgyzstan.”

The report is available here final-report 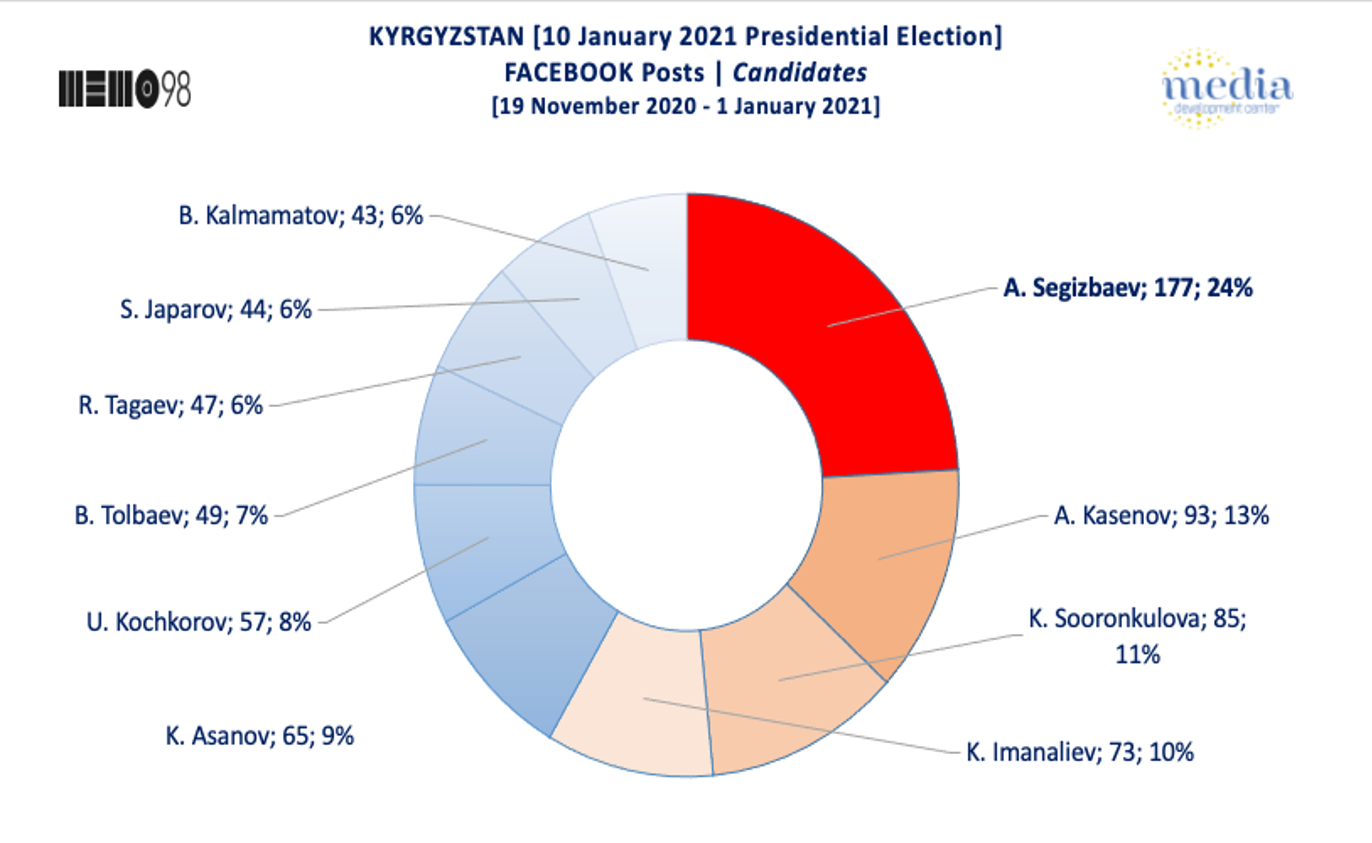 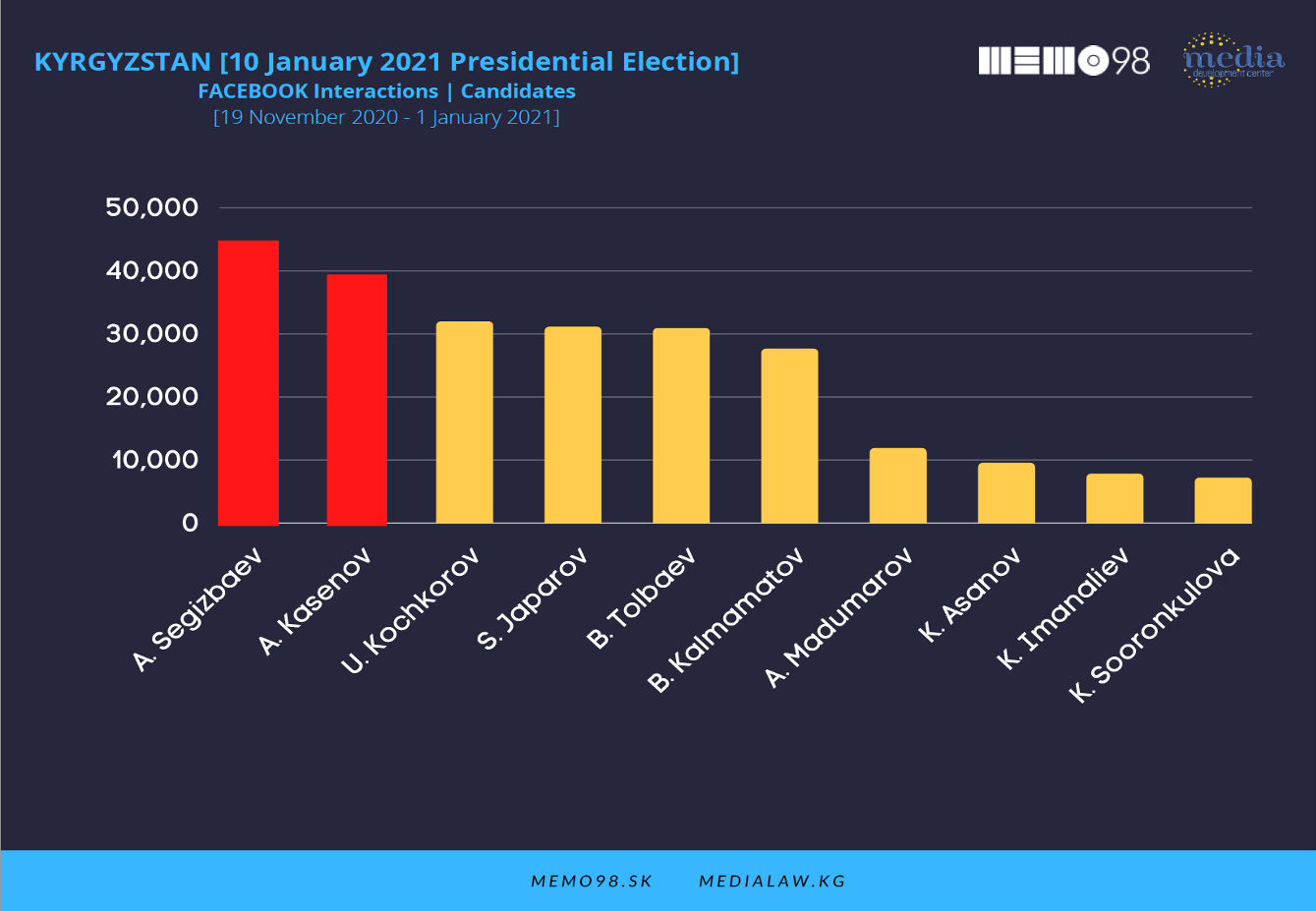 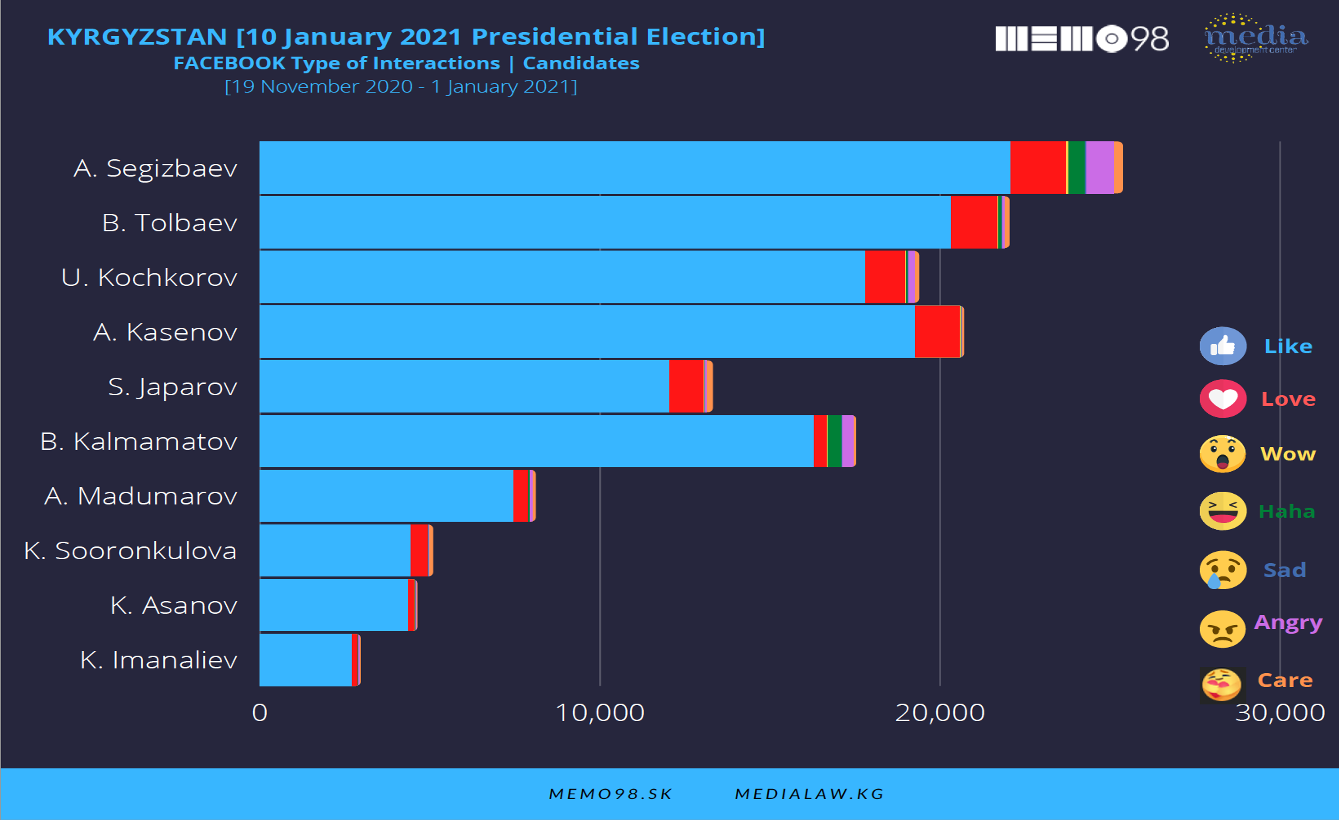 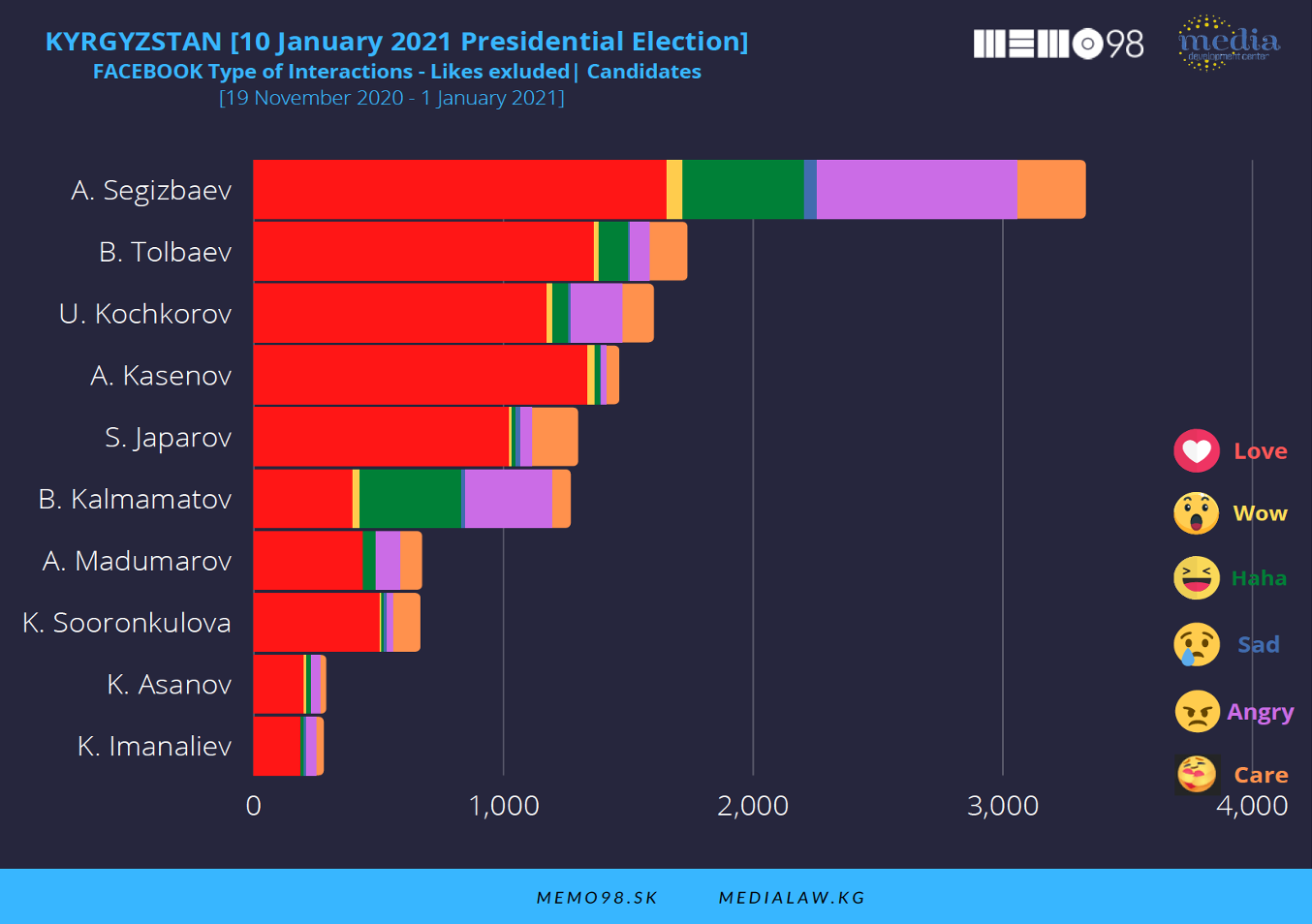 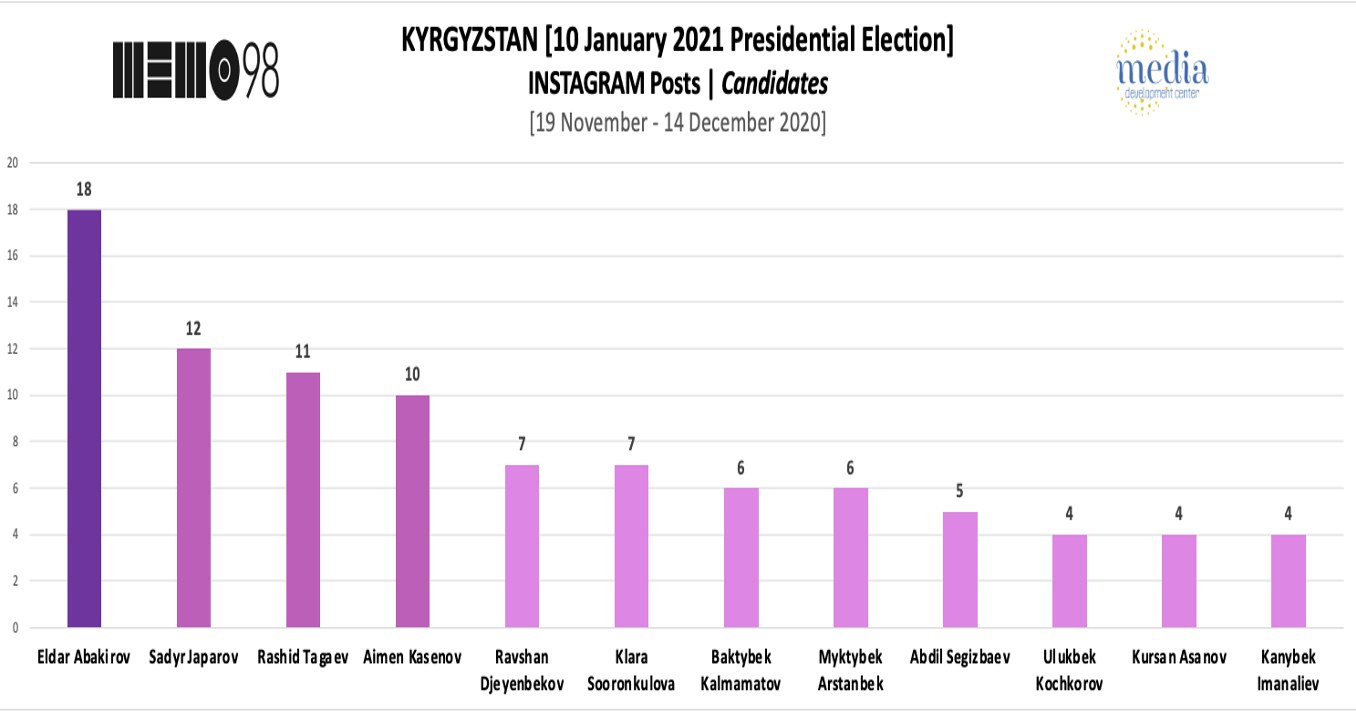 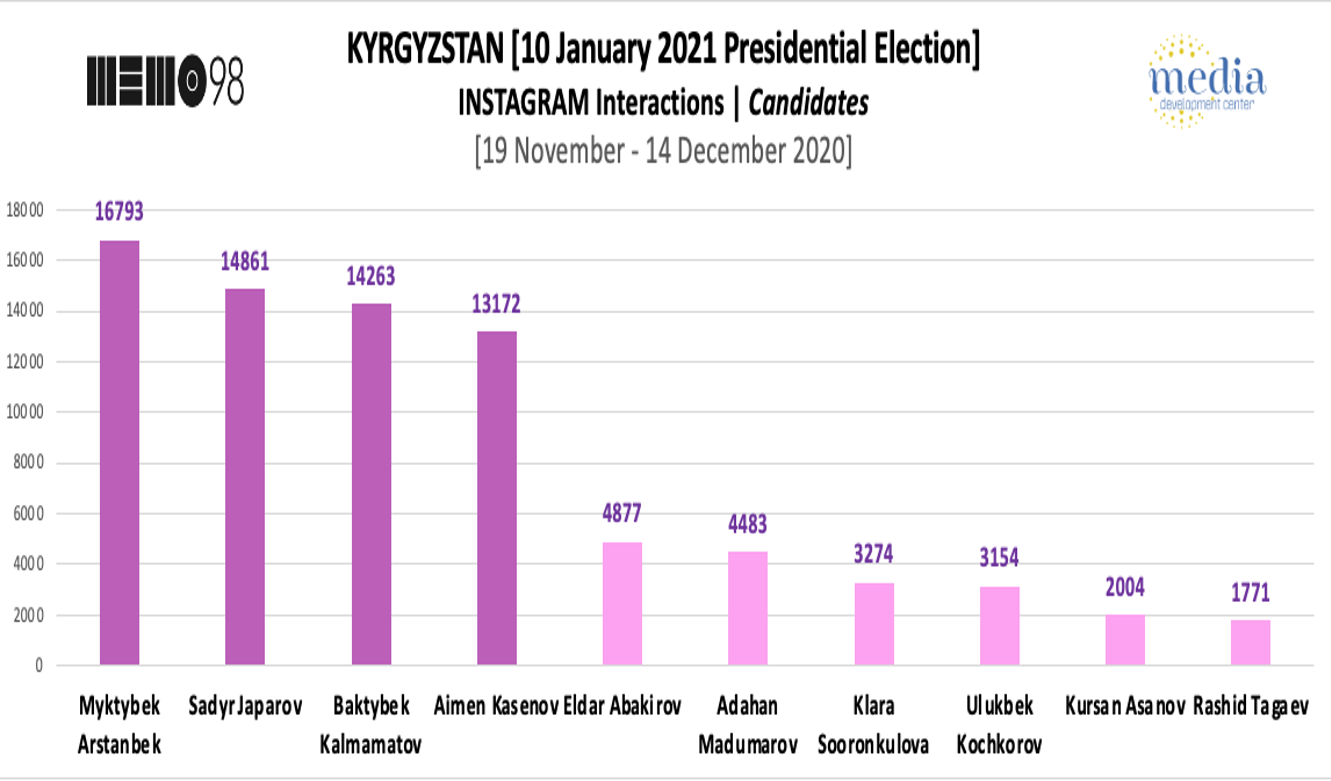