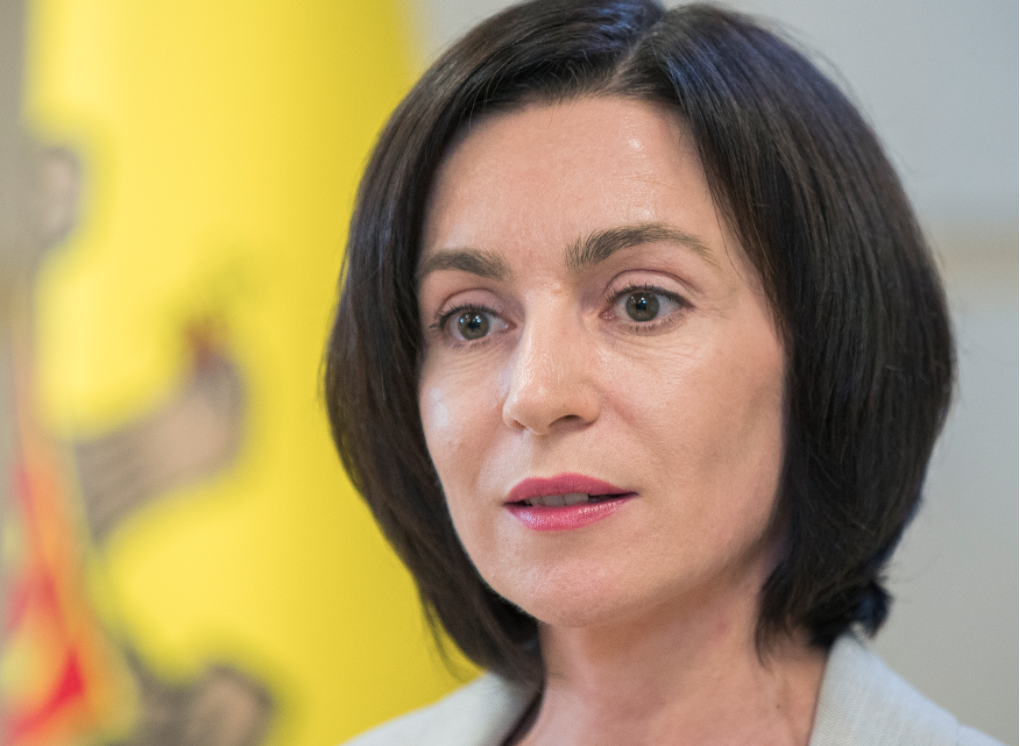 Chisinau: Moldova’s new President-elect Maia Sandu out-competed the incumbent Dodon in online campaigning ahead of the second round of voting, helping her secure victory in the runoff, according to social media monitoring conducted by Mediapoint and MEMO 98 and supported by the SlovakAid and the National Endowment for Democracy.

The runoff – a repeat of the 2016 elections – was widely seen as a referendum on the country’s direction, with Dodon representing closer links with Russia and Sandu with the EU. As in 2016, Sandu prevailed on Facebook where she generated over 400k interactions, close to two and a half times the figure of Dodon. This was despite the fact that Dodon was significantly more active on Facebook, producing 86 posts to Sandu’s 49.

Following the first round, both Sandu and Dodon attempted to engage voters of the eliminated candidates, including by writing some of their posts in Russian. Dodon, who is historically popular with Russian-speakers, wrote almost 78 per cent of his posts in both Romanian and Russian. Sandu, however, only wrote around 16 per cent of her posts in Russian, with the remainder in Romanian.

Spending on paid promotion by Dodon and Sandu continued to be relatively low, with a little over €13,000 invested by both candidates on Facebook and Instagram. However, Sandu spent five times more than her rival, almost €11,000 against only €2,000 invested by Dodon.

In terms of the content of their posts on Facebook, both candidates focused primarily on their campaign messages, communicating directly with voters. When it comes to other topics and issues, Sandu focused on fighting corruption and poverty, on culture, jobs & unemployment, as well as the handling of COVID-19, with its health and social implications.

Dodon, apart from concentrating on the election, focused on ethnic polarization, education, on the Ion Chicu government, salaries & pensions and measures against COVID-19. Social media users were most engaged by Facebook videos as well as Facebook Live, featured in the form of interviews with candidates, such as the interview of Sandu with Ukrainian journalist Dmitry Gordon.

As in 2016, the campaign rhetoric became much more negative prior to the second round, with Dodon attacking Sandu on a number of issues. He accused her of opposing the celebration of Victory Day on 9th May and her stance on excluding Russian as a mandatory language in schools. Dodon also blamed Sandu for supporting the Union of Moldova with Romania and claimed that she was personally unfit for the top job due her “lack of values”, referring to the fact that she is not married. He also made some ungrounded allegations trying to scare voters that if Sandu wins, she would legalize same-sex marriages. On her part, Sandu pushed back on these allegations, accusing Dodon of lying – which was also the reason why she refused to debate him on television. As such, voters were deprived of an opportunity to see the candidates discussing their views directly.

Youtube channels, some of which were created after the first round, were used extensively to distribute false allegations and disinformation about both candidates. Videos published on these channels contained propaganda elements such as frightening background music, apocalyptic images on which the face of Sandu was placed, and warnings of what a Sandu Presidency would entail, including that Moldova would cease to exist, that pensions and salaries would be cut, or that there would be mass protests.

There were also some derogatory videos about Dodon distributed on Facebook and Youtube, referring to his collaboration with the exiled powerful oligarch Vladimir Plahotniuc, who was charged with forming an organized criminal group, extortion and fraud. For example, one such video alleged that Dodon is the head of a criminal gang who released bandits from prison in order to pay for his election campaign. The monitoring team also found that in addition to Facebook and Instagram, Sandu also used TikTok to appeal to young audiences (1.26 million views of her profile on TikTok in between the two rounds), while Dodon used mainly Youtube to deliver his message to voters in the form of videos (1.32 million views).

Traditional media affiliated with Dodon took an active part in the negative campaign against Sandu. For example, the Russian channel NTV ran a one-sided negative story about the education reforms conducted by Sandu when she was Minister of Education, accusing her of closing the schools which, in their view, led to “a death of Moldovan villages”, failing to present Sandu’s point of view. These stories were consequently promoted through Google AdSense Advertising and posted on Facebook pages of these media institutions.

Remarking on the findings, Andrei Fornea of Mediapoint said: “It is clear that social media have a growing impact on the election campaigns in Moldova. Statements made by both candidates went viral on social networks, with citizens, especially those in the Moldovan diaspora, becoming more active and mobilized. We have also witnessed a relatively new trend to attract certain categories of voters via YouTube and TikTok. Sandu was clearly better on social media which probably contributed to her victory in the election.” 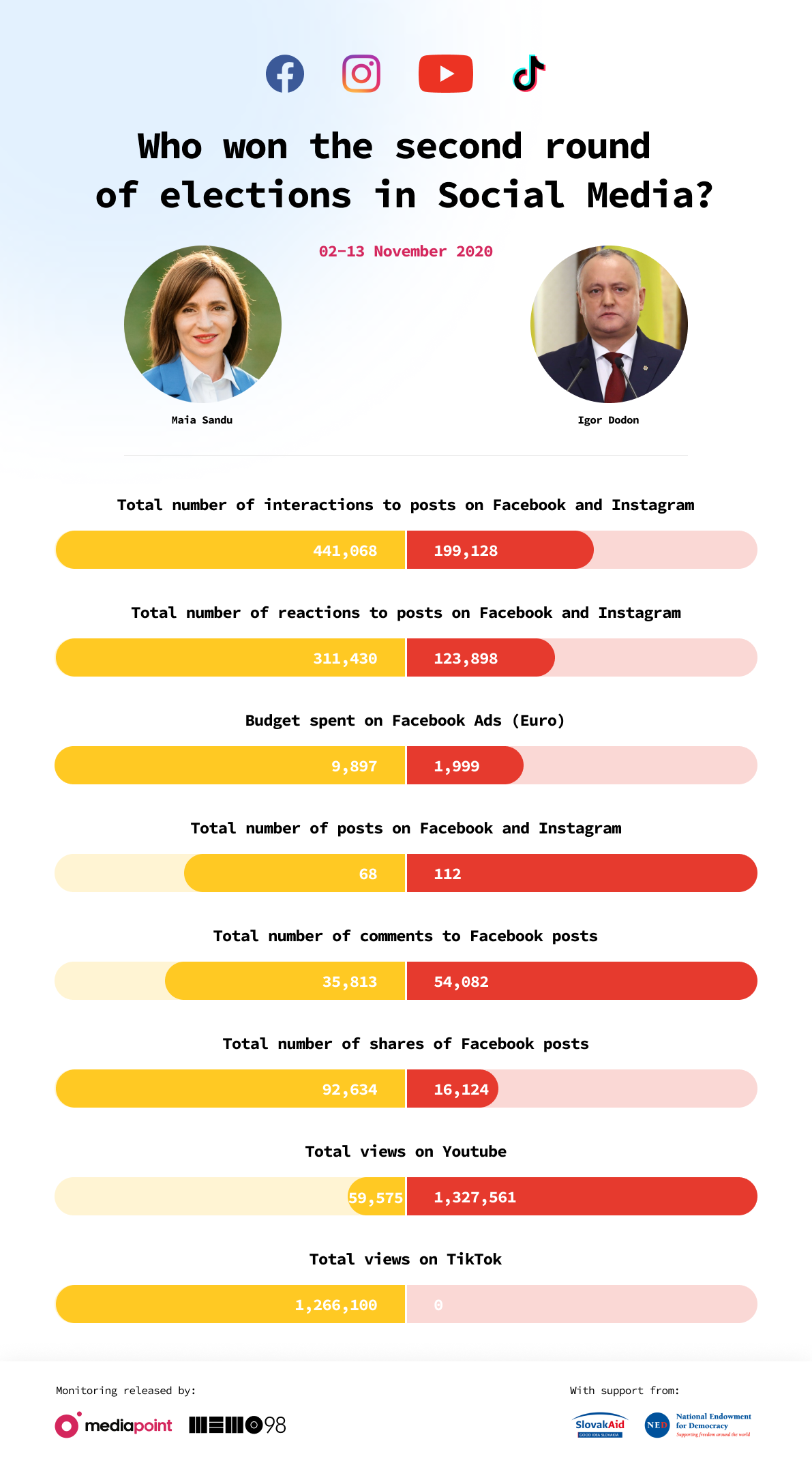 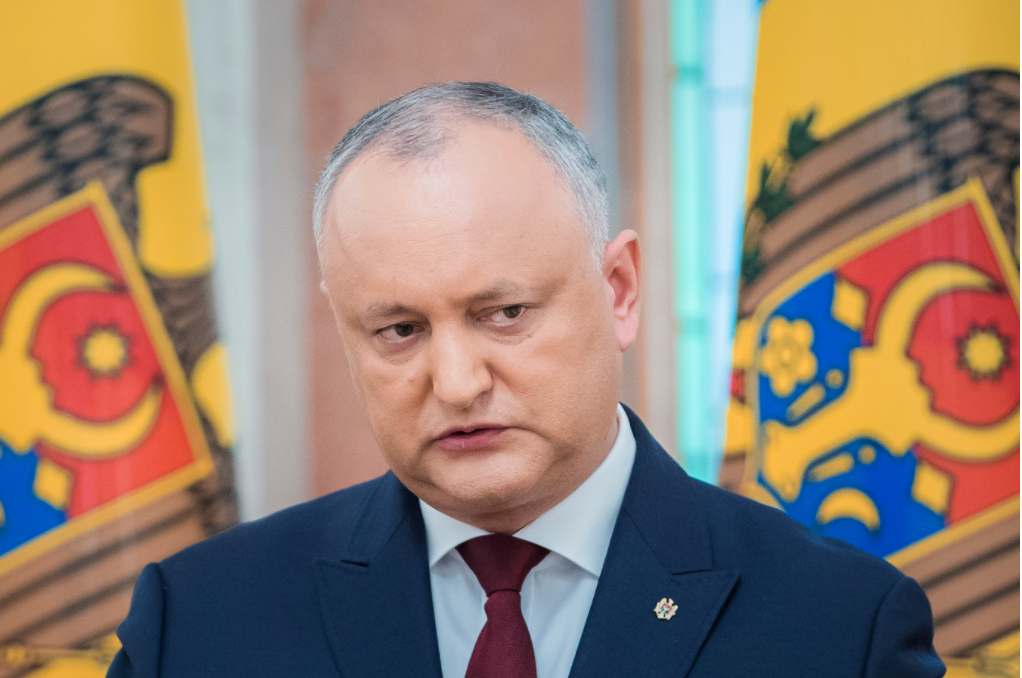