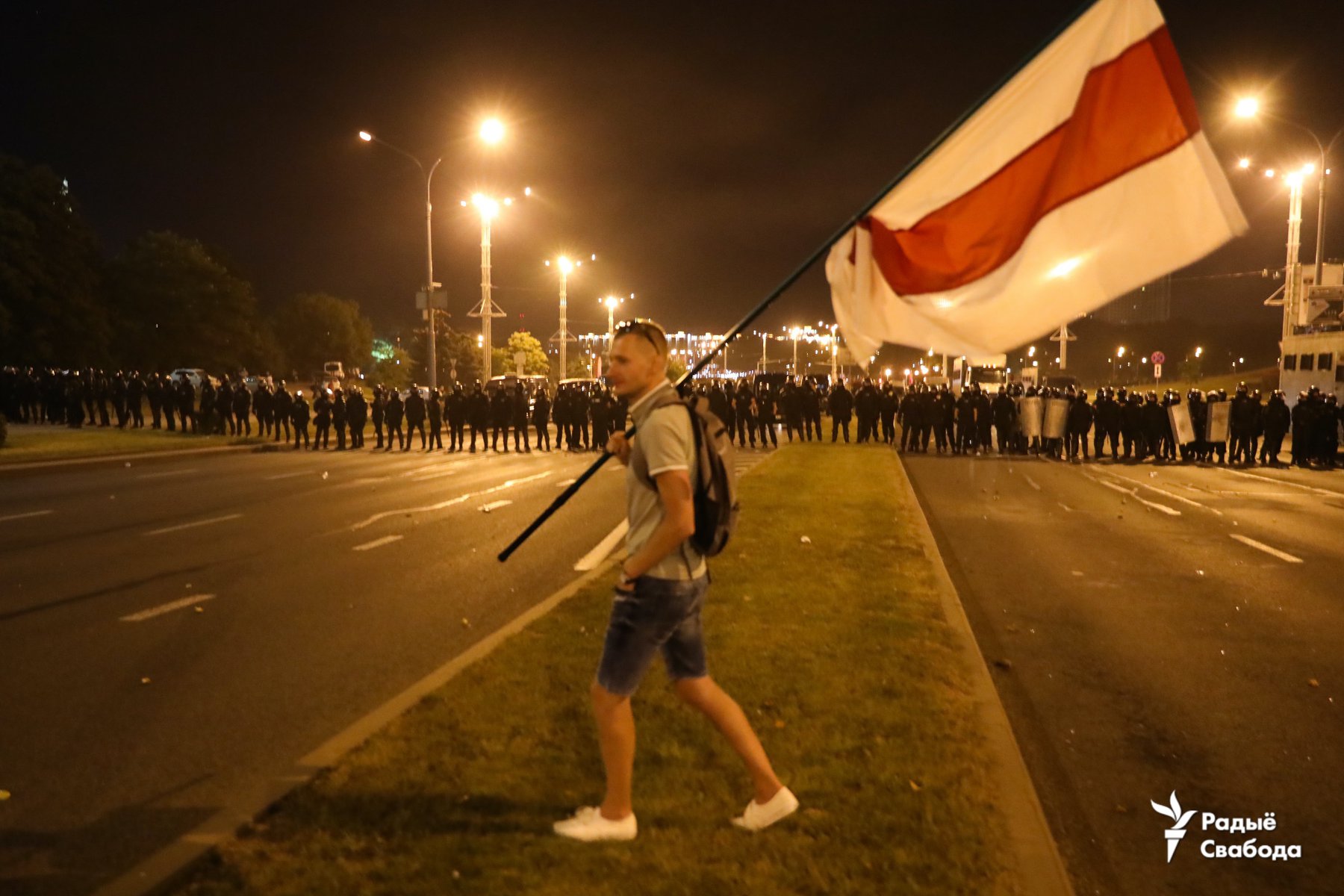 Between 29 April – 19 May (first monitoring period) and 3 – 23 June 2020 (second monitoring period), MEMO 98, a Slovak non-profit specialist media-monitoring organization, in cooperation with the Eurasian States in Transition Research Center (EAST Center), a Belarusian think-tank focusing on post-Soviet and East-European studies, and Linking Media, a Belarusian civil society organization focusing on media, monitored traditional and social media in the run-up to the 9 August presidential election. The findings of both periods were presented in our interim report published on 3 August.  This report presents the media monitoring findings of both, traditional and social media during three weeks of the official campaign period from 15 July through 4 August.

The main purpose of the media monitoring was to determine if voters were provided an opportunity to receive ample information to make qualified choices at the ballot box and whether this information was sufficiently diverse, balanced, and of adequate quality. While for most people, television is the primary source of information about politics, the growing relevance of social media has inspired us to include also Facebook, Instagram, Telegram, and VK into our monitoring. We were assessing to what extent were social media used during elections and to what extent could nominated candidates overcome the state monopoly on information by turning to social media.

The monitoring of television and social media focused also on topics and issues discussed in the context of elections. When it comes to social media, we have focused on profiles of presidential nominees and other politicians, political parties as well as influential public figures and journalists. From a wider perspective, we also wanted to assess the overall role of television and social media in the elections and their potential impact on election integrity, and thus public trust and confidence in the process.

Similar to two pre-campaign periods, the media coverage of political events differed to a large extent between traditional and social media. Although social media offered to voters a significantly wider range of political views, television still remains the most important source for political information. Yet, when it comes to television, there is a state monopoly on information and no independent channels operate in the country. In such limited media freedom environment, the incumbent took advantage of the state television to portray himself, within the capacity of the president, as the only one capable of running the country.

During the first three weeks of the official campaign, the state TV again demonstrated a clear preferential treatment of Alexander Lukashenka. It allocated him as much as 97 per cent of its political news coverage (it was 94 per cent in two periods before the official campaign), exclusively in his capacity as president, portraying him exclusively in a neutral or positive way. In sharp contrast, the other four presidential candidates, Andrei Dmitryieu, Siarhei Cherachen, Hanna Kanapatskaya, and Sviatlana Tsikhanouskaya, were not presented at all in the main news programme. Instead, there were two negative reports on nominees who were not registered (in particular on Viktar Babaryka).

Candidates were not provided with a meaningful platform to convey their messages through the state media. One debate and two free airtime slots per candidate, aired by the state television outside the prime time could not substitute for the lack of impartial news coverage. The clear bias in favour of the incumbent president and the restrictive media environment was in breach with paragraph 8 from the 1990 OSCE Copenhagen Document which obliges participating States to provide conditions for “unimpeded access to the media on a non-discriminatory basis for all political groupings and individuals wishing to participate in the electoral process”.

The state TV aired numerous news items in which President Lukashenka highlighted his achievements - “inheriting a small piece of land called Belarus where everything was destroyed” and turning it into “a successful country”. The phrase “understand and serve the needs of people” was repeated during the campaign several times a day. The incumbent on state TV avoided calling his opponents by their names, instead referring to them as “this person” or “that woman”, in an obvious effort to belittle them in front of voters.

Belsat TV, a satellite TV based in Warsaw, showed a different picture, presenting all the candidates in a reasonably balanced manner, both in time and tone (which was overwhelmingly neutral). While the president received 37 per cent of the channel’s political and election-focused coverage, Mrs Tsikhanouskaya received 33 per cent. The other three candidates received a combined coverage of some 8 per cent, while the three candidates who were not registered (Mr. Babaryka, Mr. Tsepkala, and Mr. Tsikhanouski) obtained 22 per cent.

State TV in its news programme devoted most of its coverage to political activities of Aliaksandr Lukashenka in his capacity as president that in a broader perspective could be perceived as a hidden campaign (56 per cent of its relevant news coverage). Private Belsat devoted 60 per cent of its news programme to elections and provided also extensive coverage of protests and related intimidation of activists and others (16 per cent) that was completely ignored by the state television.

Lacking regular access to state media - the dominant traditional information channels - candidates, political parties, and widely-followed influencers and journalists relied on social media as a key vehicle to present their views. While many of these actors do not have public pages but only personal profiles, a public Facebook (FB) page of Viktar Babaryka, established in May, served as the main FB channel for a joint oppositional candidate Sviatlana Tsikhanouskaya. Other monitored actors also supported Tsikhanouskaya’s campaign, such as Mikalai Statkevich (his Telegram account remained active despite him being still detained) or Volha Kavalkova.

The monitoring of social media revealed that among all monitored actors the most present (on all three platforms together) was Anatol Liabedzka with 438 posts in total (mostly through Facebook [280]). Speaking about the presidential race, accounts of Viktar Babaryka with 427 posts (with 280 out of them on Instagram), which were essentially used for the campaign of Sviatlana Tsikhanouskaya dominated. Very active was also Andrei Dmitryieu with 297 posts (he was most active from all candidates on Facebook [109]).

In the pre-campaign period, the key focus of the social media messages by non-state actors was mostly concerned with the issues of the Coronavirus, and the arrests of politicians. During the campaign period, these actors mostly focused on the campaign per se, mainly the massive gatherings at the meetings with Tsikhanouskaya. The number of posts has visibly increased during the period of the pre-election campaign of this candidate.

The pro-government social media accounts reflected the campaign in a regular and formalistic manner, presenting the meetings of the incumbent with state officials and voters. Occasionally, posts on these accounts openly attacked the alternative candidates accusing them of lies and criminal behavior of their associates.

In general, the tone/language of the majority of monitored social media posts were neutral. Several instances of different approaches were noted, however. In particular, the posts of the pro-opposition Narodnaya Hramada Party continued to call Lukashenka a “cockroach”. The Christian Conservative Party Belarusian Popular Front published a few pieces demonstrating anti-Russian rhetoric. The pro-government accounts at times presented the alternative candidates as liars, criminals, Nazis, and in similar negative terms. 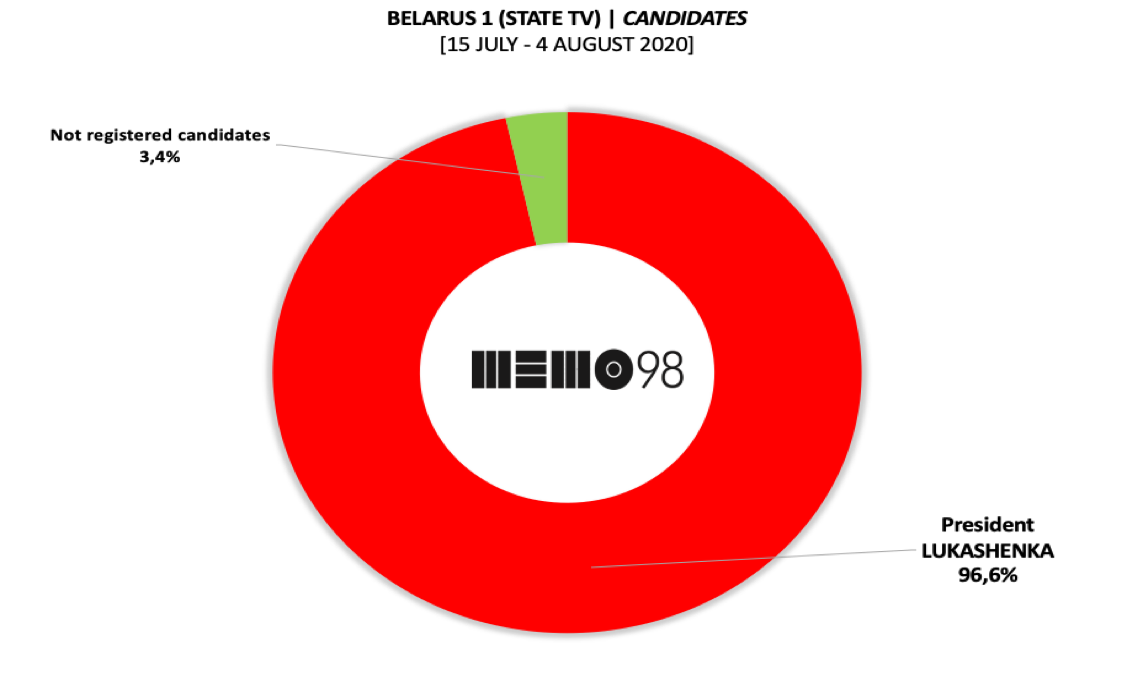 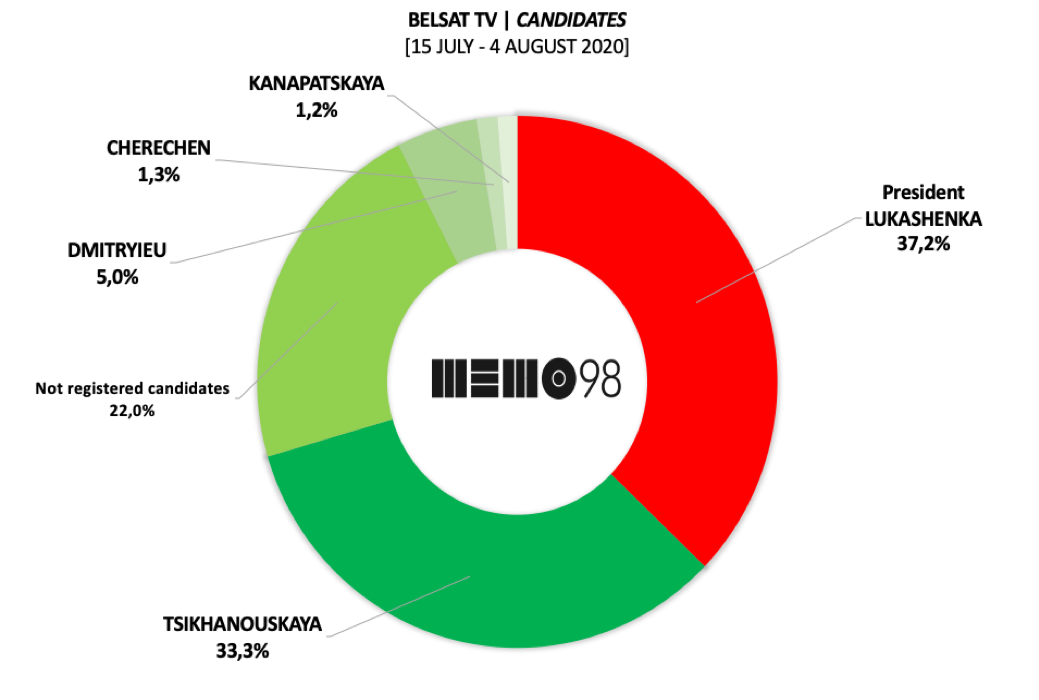 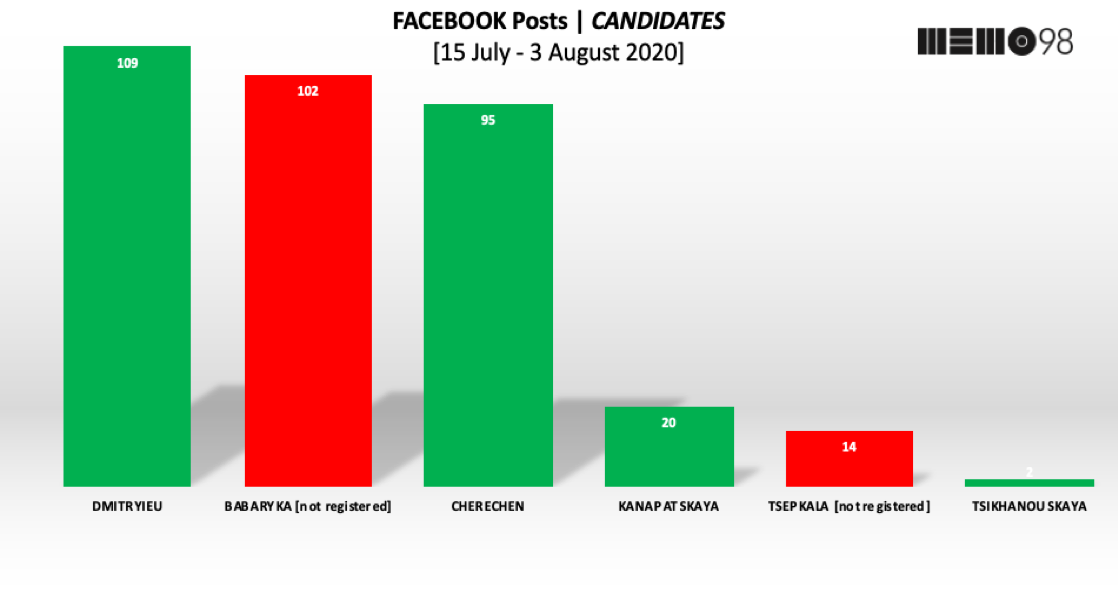 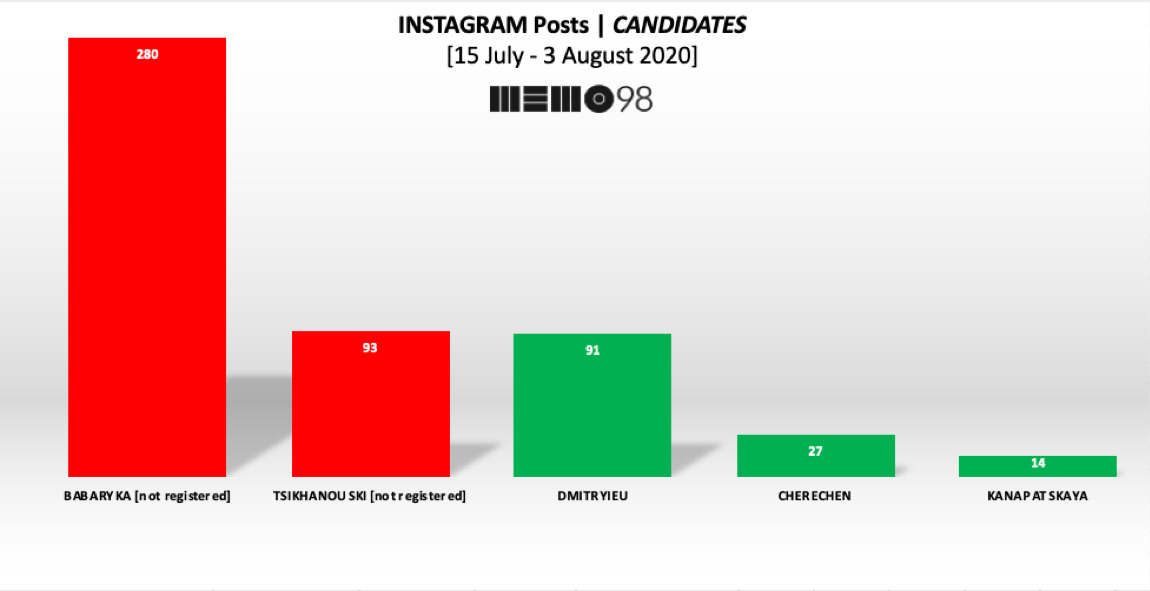 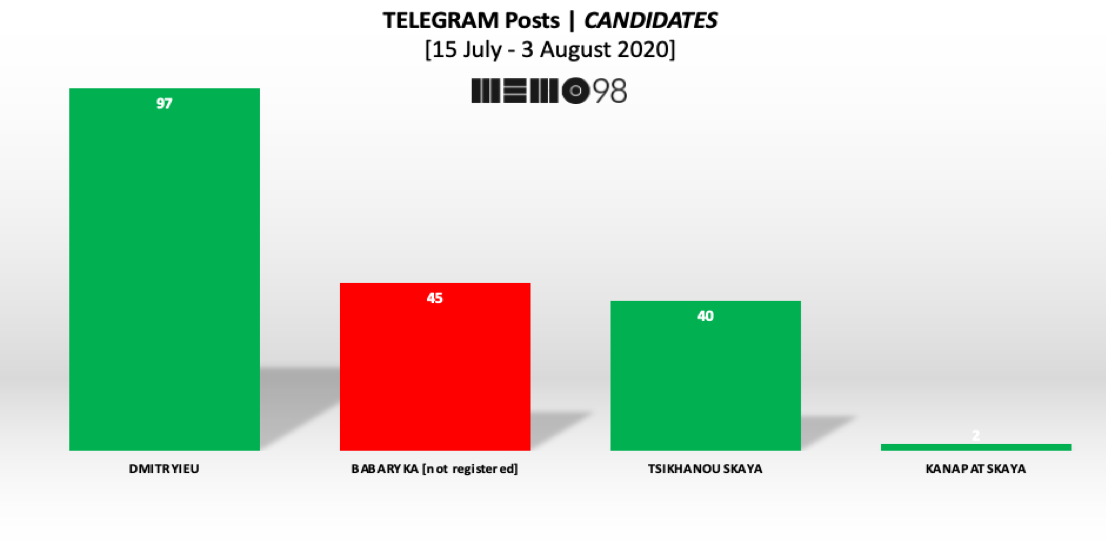 The full report is here m98_by_campaign-report_media-monitoring_complete