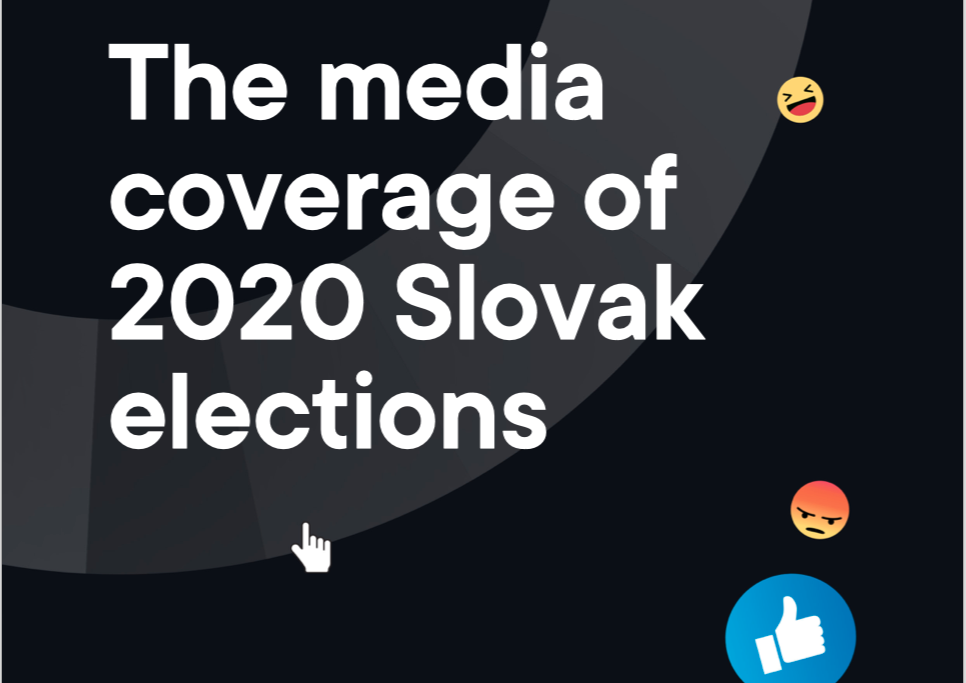 Bratislava, 24 March 2020 – Slovak voters had ample information to make a qualified choice during the 29 March parliamentary elections, the final report by MEMO 98 found. The public service broadcaster RTVS failed to live up to its obligations but was substituted by private media. While television remains to be the principal source of political information, Facebook’s role in the campaign was significant. Manipulative narratives and deceptive videos were disseminated on Facebook also by politicians, thus becoming part of the main political discourse. Read more about these findings in the report titled The media coverage of 2020 Slovak elections.

“It is of concern that when various disinformation narratives pollute the information environment prior to elections, we cannot rely on an unbiased Slovak public broadcaster which would be a reliable source of information,” said Rasťo Kužel of MEMO 98 which has focused on the media coverage of elections globally for the last two decades. According to Kuzel, RTVS failed to live up to its obligations as public service broadcaster, and its legal commitments to remain unbiased were compromised by its support to parties of the then ruling coalition. The support was demonstrated both in the amount of time devoted to the government and the SNS party as well as in the manner of the presentation. Not only did the party of the former speaker of the parliament Andrej Danko, SNS, receive special attention in the news programs, but it was also the most frequently invited guest in the RTVS’s discussion program O 5 minút 12.

“Fortunately, some private media have been providing information which is important for the democratic character of the country, such as systematically pointing out the danger of fascism. At the same time, these media have provided robust independent and critical reporting, thus holding authorities to account” opined Ivan Godársky of MEMO 98. Given the discussion programs as well as multimedia formats, compounded by analytical reporting of several online media, Slovak voters had ample information to make a qualified choice at the ballot box during the recent elections.

Facebook most likely significantly contributed to the change in the campaign dynamics with the video of the OĽaNO movement titled Right now outside the villa of ex-minister Počiatek in the French Riviera, which had more than 1,6 million views. There were other OĽaNO videos which were among the posts receiving most interactions.

On the other hand, Facebook did not manage to oversee the proper and uniformed implementation of the rules designed to enhance the transparency of political advertising and the application of its Community Standards. Establishing the special fact-checker a few days prior to elections did not help to reduce the amount of the problematic content on the platform.

While the problematic advertisements of the SMER-SD party were banned by Google, they continued to run uninterrupted on Facebook. While Facebook banned pro-LSNS-Kotlebovci party pages of the Kulturblog platform as well as a few other pages supporting the party, they reacted very promptly and reappeared on Facebook the very next day.

The growing influence of social media produced more manipulative content, which was spread in a coordinated fashion

The growing influence of social media brought with itself also more unverified and manipulative information, which confirmed users in their pre-existing prejudices. Social media and information manipulation are considered a growing threat to election integrity also abroad. It is clear that the situation in Slovakia is very similar.

Voters had ample information to make a qualified choice at the ballot box. In spite of the relatively well-established and continually growing influence of the so-called ‘alternative’ sources, the traditional media brought a wide range of information about all relevant political stakeholders. A number of discussion formats and multimedia formats were available along with analytical and critical approaches by some online media which systematically pursued the democratic public interests. The pivotal role of Facebook was one of the major phenomena of the campaign; for the first time in Slovak history, Facebook strongly influenced the way how information was provided during the election campaign for parliamentary elections.

RTVS failed to meet its role as a public broadcaster – the legal requirement of impartiality during an election campaign was compromised by showing support to parties of the ruling coalition. This became most evident both in the amount of airtime as well as in the tone of presentation of the government, and particularly one of its parts, the Slovak National Party (SNS). This political party, led by Andrej Danko, Speaker of the National Council (i.e. the Slovak parliament), enjoyed significant attention in the news and he was even the most frequently invited guest in the main political debate program titled ‘O 5 minút 12’ during the campaign. Still, the Council for Broadcasting and Retransmission has failed to notice this failure.

Online media, namely the news portals (aktuality.sk), as well as websites of some print titles (Denník N, SME, and Pravda), represent an increasingly important information base for citizens. They are long-standing providers of information which is important for the democratic character of the country (with regards to the threat of fascism) and at the same time, with their critical attitude, they hold the state authorities to account. In this respect, they often supplement or even fully substitute the public nationwide TV and radio (RTVS). Many of them successfully utilized the advantages of running multimedia editorial offices and held discussions and interviews with candidates.

While social media have become a permanent and relevant component of election campaigns in Slovakia, this time they played a pivotal role in the context of the parliamentary elections. Although Instagram is gradually gaining popularity, only a minimum number of candidates used it actively to communicate their political messages. On the other hand, Facebook has become an important channel in the campaign, and it is quite likely that it contributed to the major change of the electoral dynamics, as the video by the future winner OĽaNO (Ordinary People and Independent Personalities) from the French Riviera had over 1.62 million views. Also, the three election advertising spots by SMER-SD and one from SaS registered over one million views.

To modify the system of RTVS funding with the objective of increasing its independence from the influence of the government and thus enable the broadcaster to fully unwind its public-service character, particularly in respect of news and current affairs programs. RTVS should present a true plurality of opinions and should not be afraid to protect the public interests even through criticism of those in power and therefore support and conduct investigative journalism.

The media regulator (The Council for Broadcasting and Retransmission) should actively oversee broadcasting during election campaigns. Moreover, legislative conditions should be established enabling a prompt reaction to any breach of rules, including an adequate sanctioning mechanism. Besides the above, the Council should be obliged to perform monitoring of news and current affairs programs during the campaign.

In compliance with the right of voters for information, it is important to enabling them to differentiate between paid advertising and other information. The sponsored election content – whether online or offline – should be clearly labeled as such to ensure it is obvious who paid for its publishing. In this respect, the competent authorities (State Committee for Elections and Control of Financing of Political Parties and the media regulator) should establish a permanent archive of advertising content. This archive should be publicly accessible to increase the transparency of the electoral process and should also provide easy-to-navigate categories (e.g. based on the respective paid amounts or types of expenditures).

Multinational technological corporations (such as Google, Facebook etc.) should do their best to improve the transparency of online political advertising and to promptly react to any content which breaches their standards or the relevant national legislation. Regulatory authorities should communicate with the above corporations on a regular basis and ensure efficient and timely reactions in case of any abuse of their platforms for dissemination of hateful, violent, or otherwise illegal content. Should this solution turn out to be insufficient for the elimination of similar issues during election campaigns, it is necessary to consider a specific legal regulation in this particular area.

To re-consider the system of appointment of RTVS General Director, as well as the members of the media regulator. The objective in both cases is to strengthen the aspect of professionalism of the elected officials and their real credit among professionals to the detriment of any direct political influence. Also, it would be desirable to ensure transparency of the process, taking advantage of public hearings and subsequent public vote.

The press release in pdf is available here: press-release