Between May and October 2022, we will be issuing a weekly newsletter containing the results of our monitoring, looking at the main propaganda narratives detected on Russian media during the week. This will be complemented by news from independent international media sources to distribute these insights outside the country. The newsletter will include main spotlights from Russian and international news coverage focusing on relevant information, key propaganda and disinformation narratives, statistics, quotes, interviews, expert opinions, independent views, as well as other pertinent developments. This is the second issue of the newsletter covering the period 10-15 May. The first issue covering the period 4-9 May can be found here.

You can subscribe to the public newsletter Media Insights – War on Ukraine here.

Photos of the Week 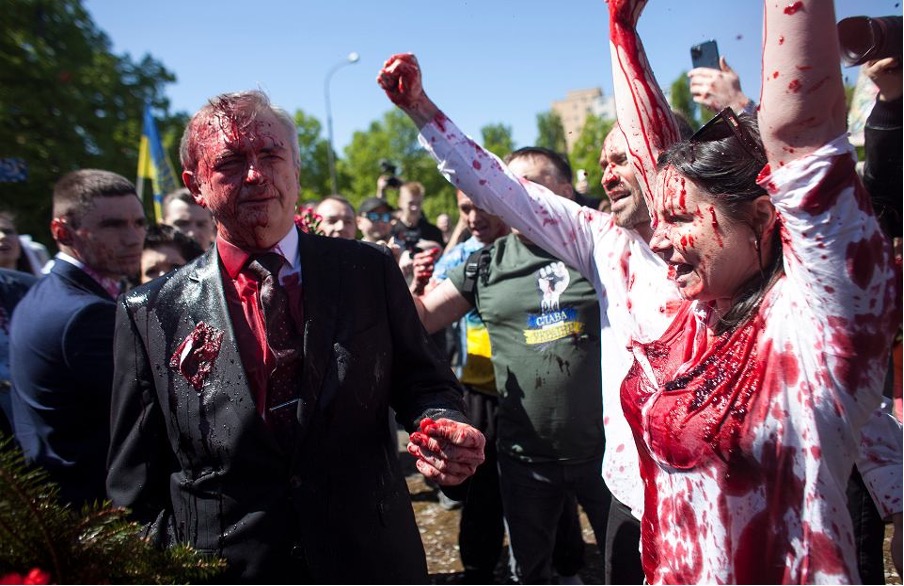 The Russian Ambassador to Poland Sergey Andreev was splattered by a red liquid thrown by protesters in Warsaw as he arrived to participate in a commemorative event. [Gazeta Wyborcza, 10 May] 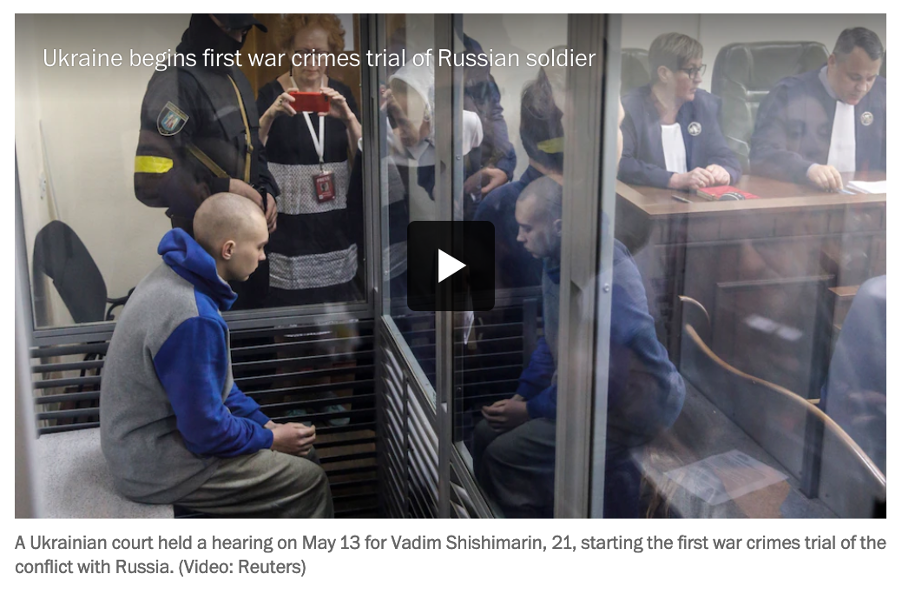 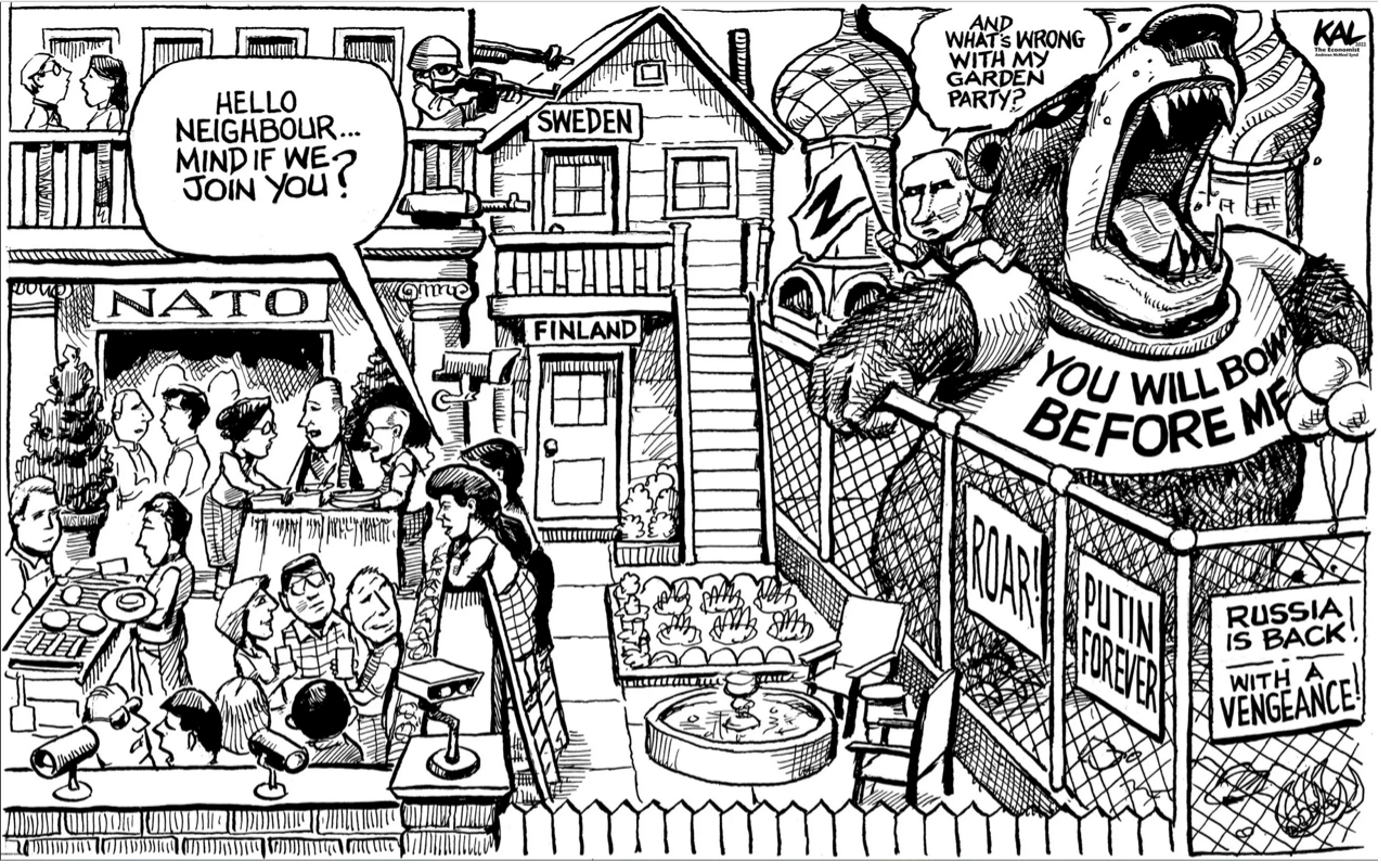 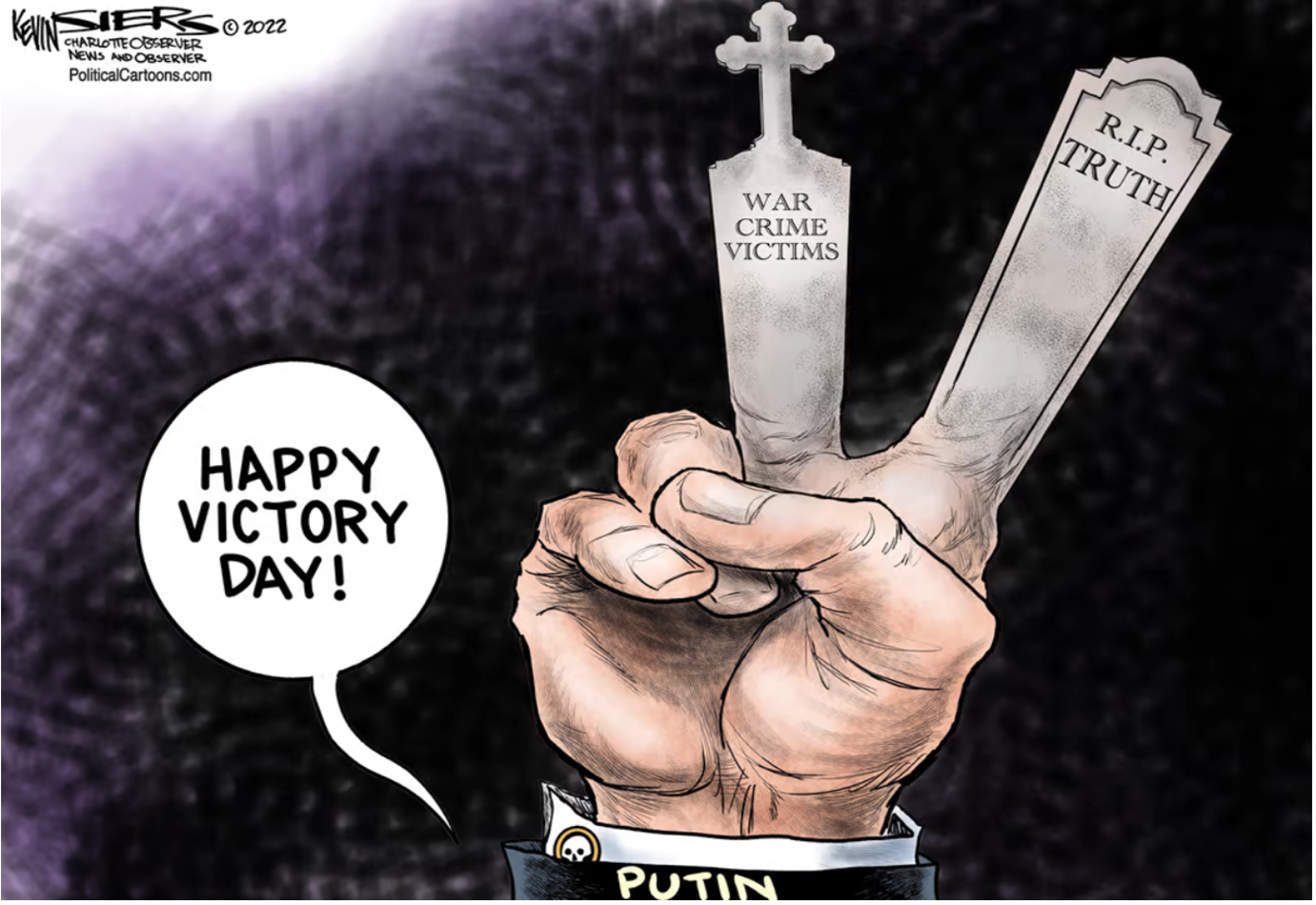 [Politico, 14 May (First published in The Charlotte Observer, 9 May)]

Quotes of the Week

“Going back to 24 February, it was enough to convince Kyivans to sit down at the negotiating table with Lugansk and Donbas. And then a peaceful resolution of the ongoing conflict could be possible. But as of today, all Russian demands and concerns have been ignored. As a matter of fact, we had no other options as to get under the NATO’s train moving at high speed towards Russia.”
[Russian Ambassador to the US Anatoliy Antonov, Smotrim (Solovyov Live), 14 May]

“We want to speak the truth,” Alyokhina from Pussy Riot said. “Those Russians who are aware are already doing all they can and are being imprisoned.”
[Washington Post, 12 May]

What were the main narratives on Russian state media?

How European politicians tried to forget the Great Victory over Nazism

While mocking Western countries for surrendering to Nazi Germany in a matter of days during WWII, Rossiyskaya Gazeta suggested in its article from 15 May that Europe ‘could never forgive’ that ‘the Soviet Union achieved the surrender of Germany’. It attributed the victory by USSR solely to the Russian people, ignoring contributions from other nations: ‘while the people of the USSR, the Russians, had their great victory, today's EU Member States never had it’. The article gives an account of ani-USSR sentiments in Czechia, Germany Latvia, Poland, and Ukraine, accusing ‘politicians of the Old World’ of ‘cowardly oblivion’; of a ‘desire to forget the Victory of the Soviet Union.’ [RG, 15 May]

In line with the above-mentioned sentiments, RIA Novosti delivered a story about a resident of Mariupol, an Azovstal employee, who was evacuated with his family to Rostov-on-Don. While depicting details of his life over the past few months in Mariupol, and while he expressed his hopes that it would “become Russian now”, he also told RIA Novosti that he saw a real Victory Parade Rostov-on-Don on 9 May for the first time in a long time: ‘There have been no parades in Mariupol for many years.’ [Ria Novosti, 15 May]

Continuous advances of the Russian Army

"Daughter, please do not dig up your father": Ukrainians staged a hell in Rubizhne worse than in Bucha says the article in KP which accuses Ukrainian forces of atrocities in the city of Rubizhne. According to the article, “people were buried during the intervals between the terrible shelling by the Ukrainian artillery in an attempt to slow down the advance of the Russian troops and the people's militia of the LNR.’ A local resident allegedly said: ‘This is where we got a "gift" from the Ukrainian fascists - "Hurricane", which destroyed 500-odd apartments in one second. We are all living on a volcano now. We don't have many people left now, but now they will start to come back. So we need help clearing mines.’ [ KP.ru, 15 May] 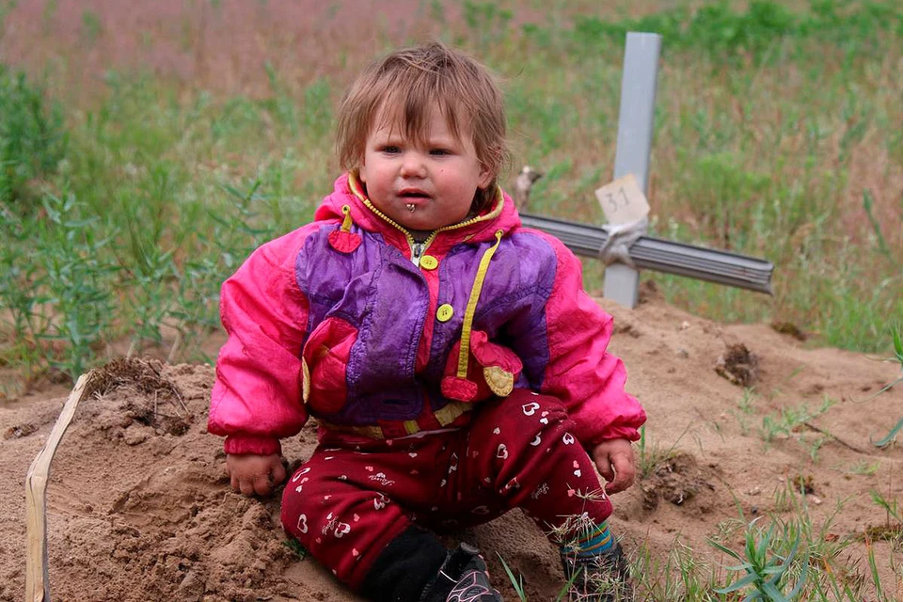 Little Tanya at her father's grave in the city of Rubizhne. [Photo: Alexander Kots, KP]

In a  1TV news item, the Luhansk People’s militia, with the support from the Russian Army, was praised for taking control over the Zarya chemical plant in Rubizhne, calling this plant ‘the last stronghold of the neo-Nazis, from where they shelled the civilian population’ and thus preventing the ‘Azovstal scenario’. [1TV, 14 May]

A large-scale catastrophe was prevented near Rubizhne

1TV built on the story the next day, 15 May, praising militia and the Russian military, who prevented a ‘large-scale disaster’ near Rubizhne which could have affected 300,000 residents as ‘Neo-Nazis were planning to blow up tanks with hazardous substances at the Zarya chemical plant. [1TV, 15 May]

Calming down panic around Russia’s losses and ridiculing the U.S. State Department

In his weekly show, Solovyov refuted Russia’s retreat from the Kharkiv region and once again went in-depth on Russia’s fabricated narratives debunked by the US State Department. In particular, Solovyov went after each statement and confirmed them once again: Among Solovyov’s false narratives:

- Ukrainians are killing their own civilians to blame Russia.

- The British are responsible for the mass civilian deaths in Bucha because the city’s name sounds like the English word “butcher.”

- The United States intends to destroy Russia and seize its nuclear weapons.

- The poisonings of Sergei Skripal and Aleksey Navalny were Western provocations to blame Russia. [1TV, 14 May]

Retaliation measures against the Western sanctions

Sanctions against the Russian Federation and retaliatory measures have been introduced. Rossiskaya Gazeta allegedly cites Foreign Policy: "Because of the "defective" democracy in the United States, most countries did not oppose the Russian Federation", but it's not linked it an article to a website only. [RG, 15 May]

Western sanctions against Russia hit the economies of those countries that impose them, and in many ways, it is these restrictions that provoke the global crisis.  Russian President Vladimir Putin made this statement at a meeting on economic issues. [RG, 12 May]

What did independent media say about the main topics?

Ukraine is preparing 41 war crimes cases against Russian soldiers, according to Ukrainian’s prosecutor general. “We have 41 suspects in cases with which we will be ready to go to court,” Iryna Venediktova announced during a live briefing on Ukrainian TV. “All of them concern Article 438 of the [Ukrainian] criminal code on war crimes, but different types of war crimes. There is the bombing of civilian infrastructure, the killing of civilians, rape and looting.” The announcement follows the first war crime prosecution of a Russian soldier during the 11-week conflict. Vadim Shishimarin, 21, is accused of killing an unarmed civilian in a village in the Sumy region of northeastern Ukraine during the early days of the conflict. He faces 10 to 15 years, or life in prison, according to the prosecutor’s statement. [Washington Post, 13 May].

Kateryna Prokopenko and Yuliya Fedosiuk, the wives of two Ukrainian fighters still holed up in Mariupol's Azovstal steelworks, spoke to the Pope in the Vatican's St Peter's Square. In a video released by the Vatican, they tearfully ask Pope Francis to help their husbands, saying: "Please don't let them die." They told the Pope that the remaining soldiers have no food or water, many are injured and some are dead. They said the troops are waiting to be evacuated to a third country. The Pope said he would do everything possible and will pray for them.  [BBC, 11 May].

"Finland must apply for NATO membership without delay," President Sauli Niinistö and Prime Minister Sanna Marin said in a joint statement in Helsinki. Several diplomats stated that the NATO allies expect  Finland to be granted membership quickly. This would pave the way for an increased troop presence in Scandinavia during the year-long ratification period. The EU country  Sweden, which has also been neutral up to now, is also expected to express interest in joining. Chancellor Olaf Scholz welcomed Finland's decision: "In a telephone conversation with President Niinistö, I assured Finland of the federal government's full support," he tweeted. Former Finnish Prime Minister Alexander Stubb explained in an interview with Deutsche Welle that the decisive factor behind Finland's move was Russian President Vladimir Putin's decision to invade Ukraine. "I don't think public opinion in Finland would have changed so radically without the attack on Ukraine," Stubb told DW. The former prime minister added: "...when you wage conventional war on a large scale, when you kill innocent people, women and children, then people react. And that's where I think Putin makes a tactical and made a strategic mistake that he's now paying for." [DW, 12 May]

A retiree will be fined for cutting Z from a banner

A retiree from Dolinsk, Sakhalin, who cut off a banner with the Z symbol and the inscription “We don’t leave our own behind”, will be fined, Argumenty i Fakty from 11 May cited RIA Novosti. A video of a man cutting a long banner in a city square with a knife went viral on the web after Victory Day. According to media reports, the man worked at the Dolinsk police station, he quit 20 years ago. The detainee told law enforcement officers that he was opposed to a special operation to demilitarize Ukraine. An administrative case was brought against the man for public actions aimed at discrediting the Armed Forces of the Russian Federation. He faces a fine of 30,000 to 50,000 rubles. [Argumenty i Fakty, 11 May]

Celebrities against the war

They became world-famous with feminist, government-critical art actions. Now the Russian punk band "Pussy Riot" is touring Europe - against the war in Ukraine. [Deutsche Welle, 11 May] 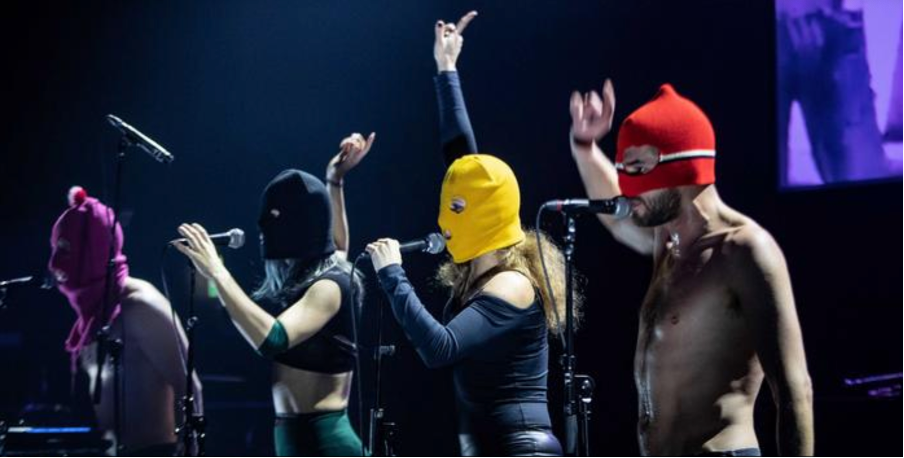 Pussy Riot took to the stage with an antiwar message on 12 May in Berlin, performing for the first time in three years after Maria Alyokhina, the lead singer, escaped Russia by disguising herself as a food courier to evade police. She is a fierce critic of President Vladimir Putin and her escape came after Russian authorities announced she would have to serve a 21-day sentence in a penal colony. Pussy Riot’s “antiwar” show, which combines music, theater and video displays, also incorporates the names of imprisoned and persecuted Russian dissidents. When asked what message the group wanted to send Putin at their concert, another member of the group said they didn’t want to send him a message at all. In their view, engaging with him is no longer possible and they hope he will be tried as a war criminal. The group was shocked by the limited international reaction following the 2014 illegal annexation of Crimea which, in their view, encouraged Putin to try to annex more territories and start the war. According to Aloykhina, it’s absurd how the Russian government promotes its invasion of Ukraine naming it a “special operation,” preventing citizens from understanding that it is a war.


Here is the Russian version of the newsletter #2.