Between 1 September and 30 October 2020, MEMO 98, a Slovak non-profit specialist media-monitoring organization, in cooperation with GIPA (Georgia), Transitions (Czechia), and Linking Media (Poland), monitored social media in the run-up to the 3 November parliamentary elections in Georgia. The monitoring included 41 different actors (political parties, politicians, and media) with accounts on Facebook who produced a total of 44,126 posts and generated as many as 21,547,243 interactions.

The main purpose of the monitoring was to determine the impact of the monitored social media on the electoral process and the extent to which social media serve as a platform to provide important information that voters need in their decision-making. While in general, for most people, television remains the primary source of information about politics, the growing relevance of social media inspired us to monitor the use of Facebook during the Georgian elections. According to a survey conducted by National Democratic Institute, the internet and social media are important sources of information people use to access political news and information in Georgia.

The monitoring also focused on topics and issues discussed in the context of elections. When it comes to social media, we have focused on profiles of contesting political parties, individual politicians as well as selected Facebook pages of traditional media. From a wider perspective, we also wanted to assess the overall role of Facebook in the elections and its potential impact on election integrity, particularly the level of public trust and confidence in the process. This monitoring was conducted by students of GIPA in the framework of a project financed by the Czech foreign ministry along with USAID co-financing coming through PIN.

● In the period between 1 September and 30 October, we monitored 41 public pages of political parties, politicians, and media, which produced a total of 44,126 posts on Facebook. These posts generated a total of 21,547,243 interactions.

●The most popular candidate on Facebook by the number of interactions was Mikheil Saakashvili (1,126,490), followed by Giorgi Gakharia (641,727) and Zurab Japaridze (337,462). The most popular party by the number of interactions was Giorgi Vashadze – Strategy Aghmashenebeli (739,631), followed by Georgian Dream (679,461), and United National Movement (615,298). Mikheil Saakashvili generated more than four times more interactions to his 128 posts than Bidzina Ivanishvili, who generated almost four times more posts.

●The issues that generated most interactions from Facebook users were Elections–campaigning, Elections-general, and Road & infrastructure.

●Among politicians, Giorgi Vashadze spent the most money on advertising on social issues, elections, and politics, starting from 4 August. At the same time, Zviad Dzidziguri was the only candidate who did not use a single euro for his promotion on Facebook and Instagram, according to the Facebook Ad Library.

●Tbilisi, Kakheti, and Kvemo Kartli were the top three administrative regions where most advertisements on social issues, elections, or politics were delivered between 4 August and 25 November. 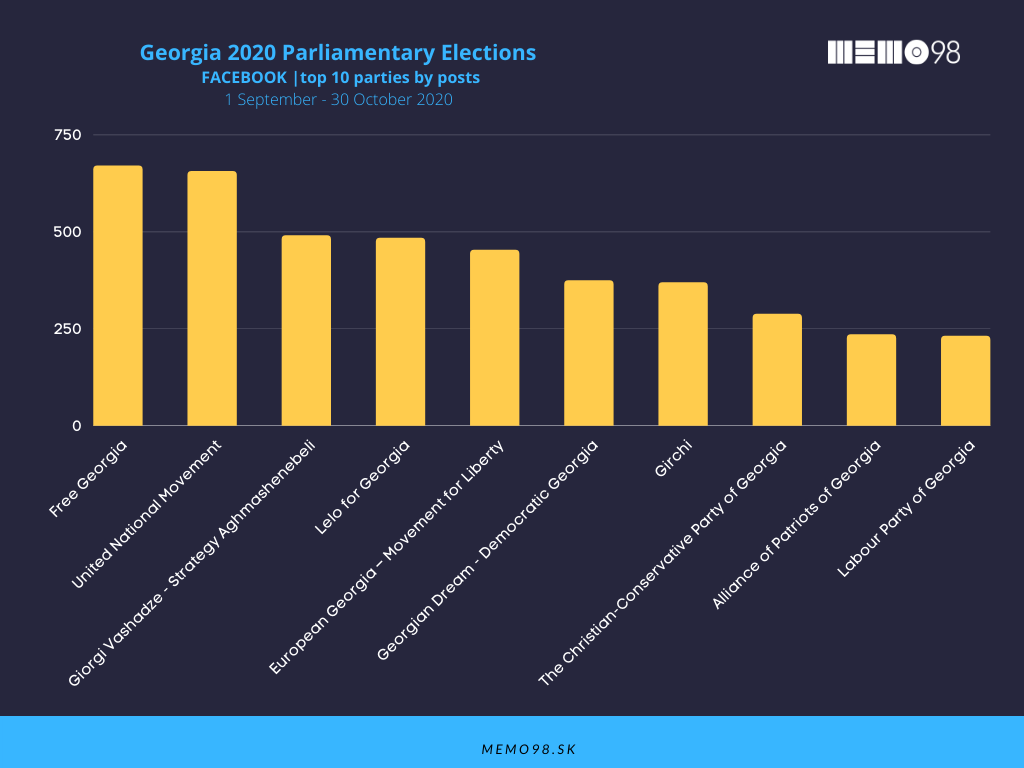 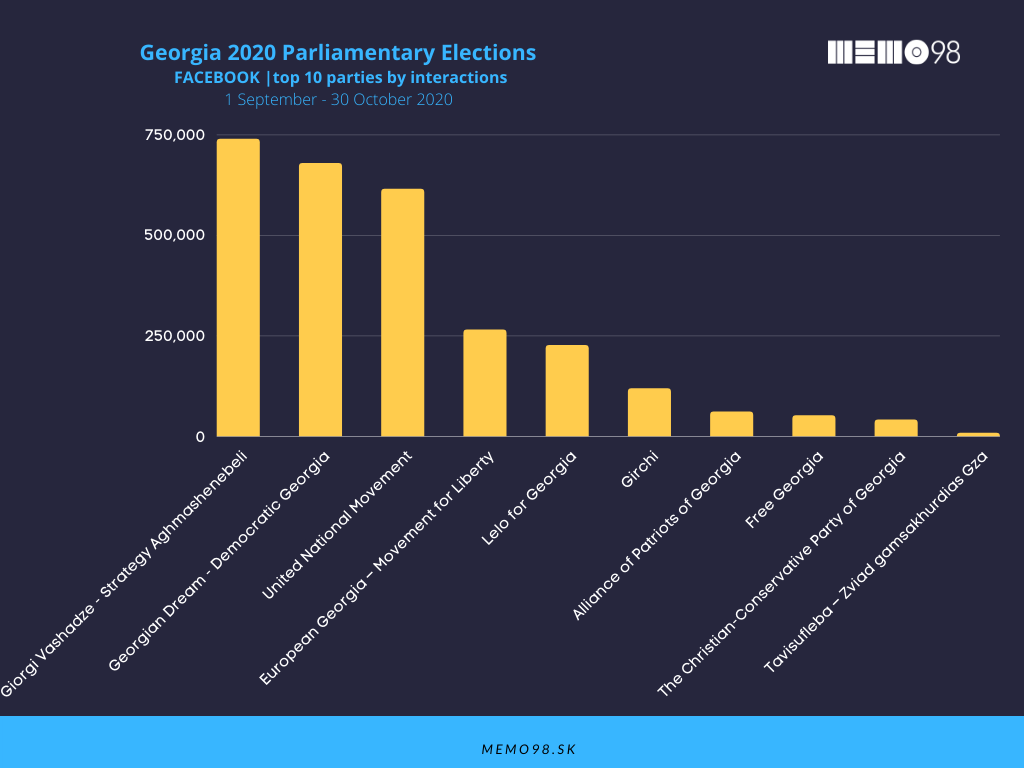 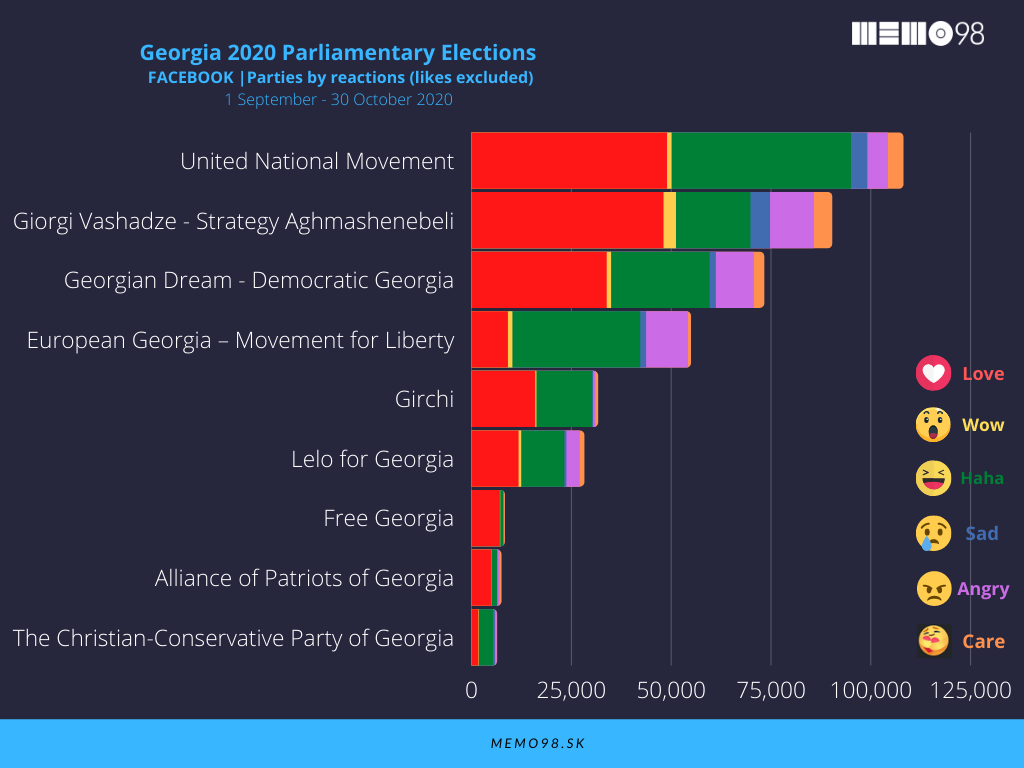 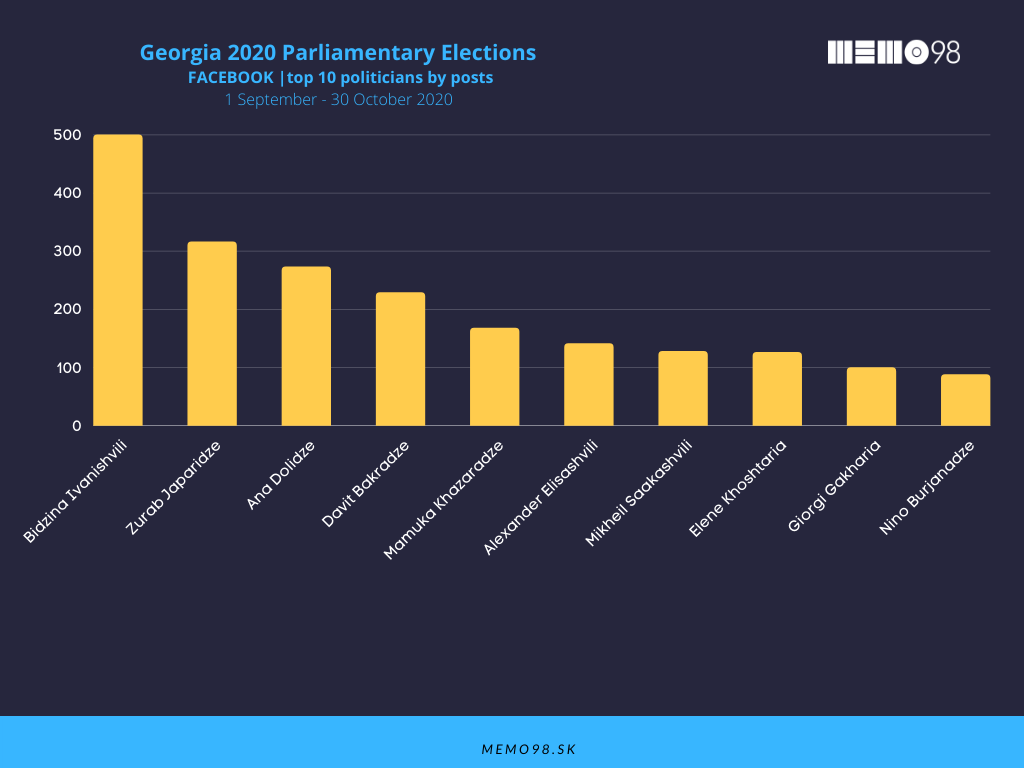 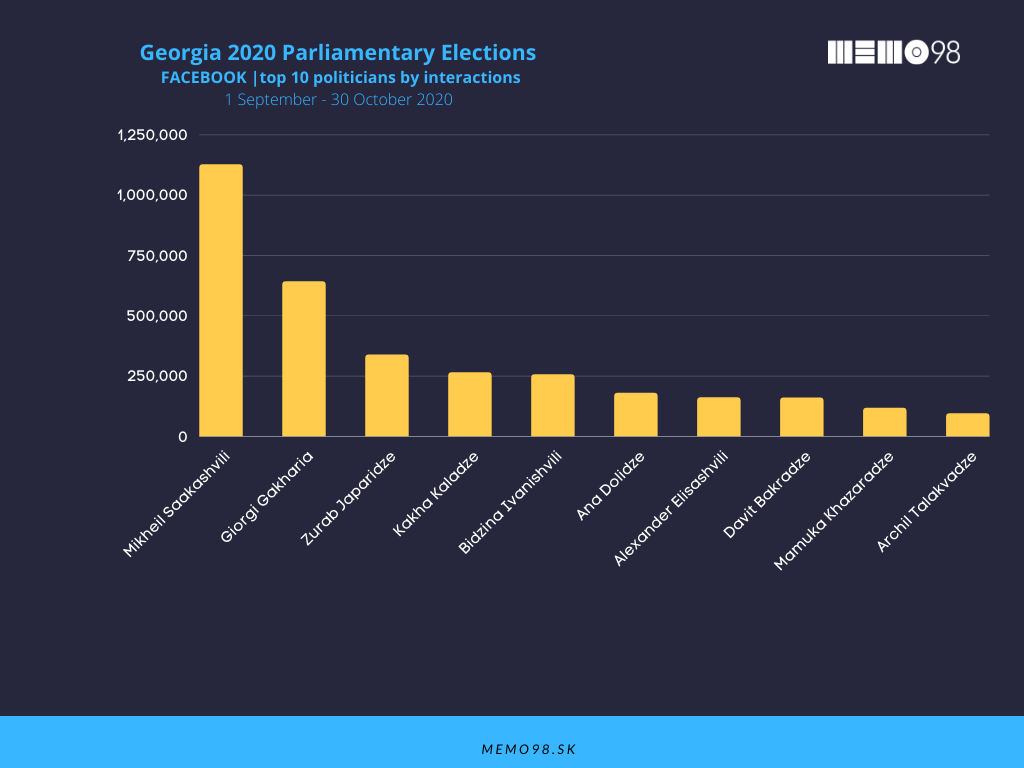 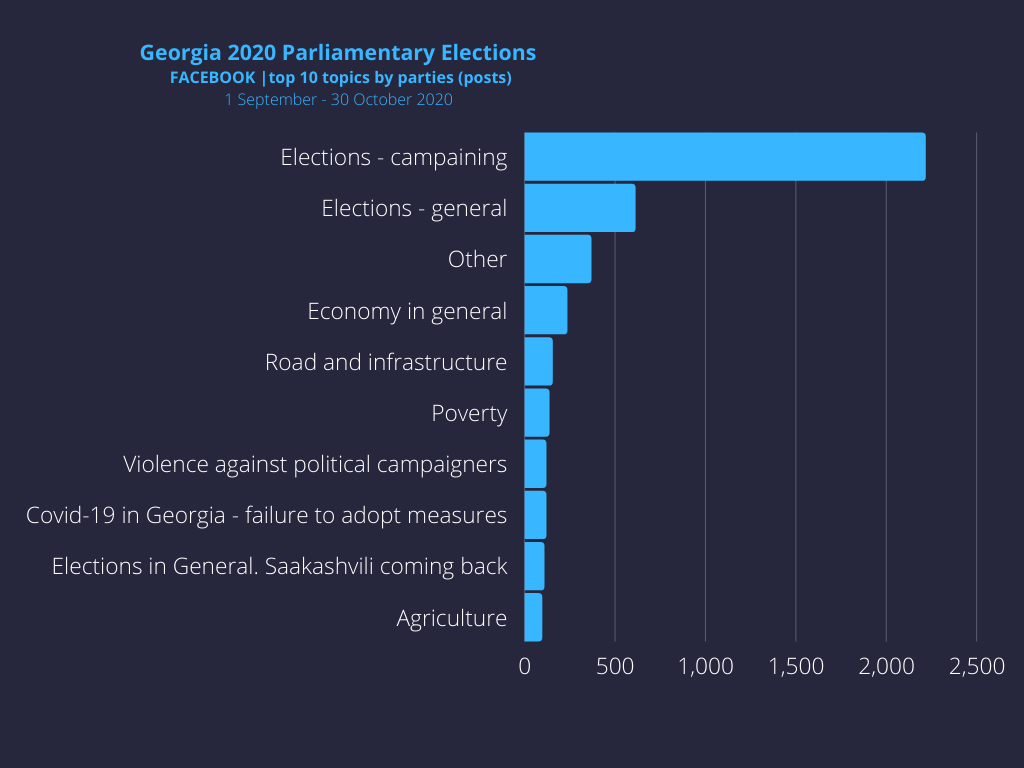 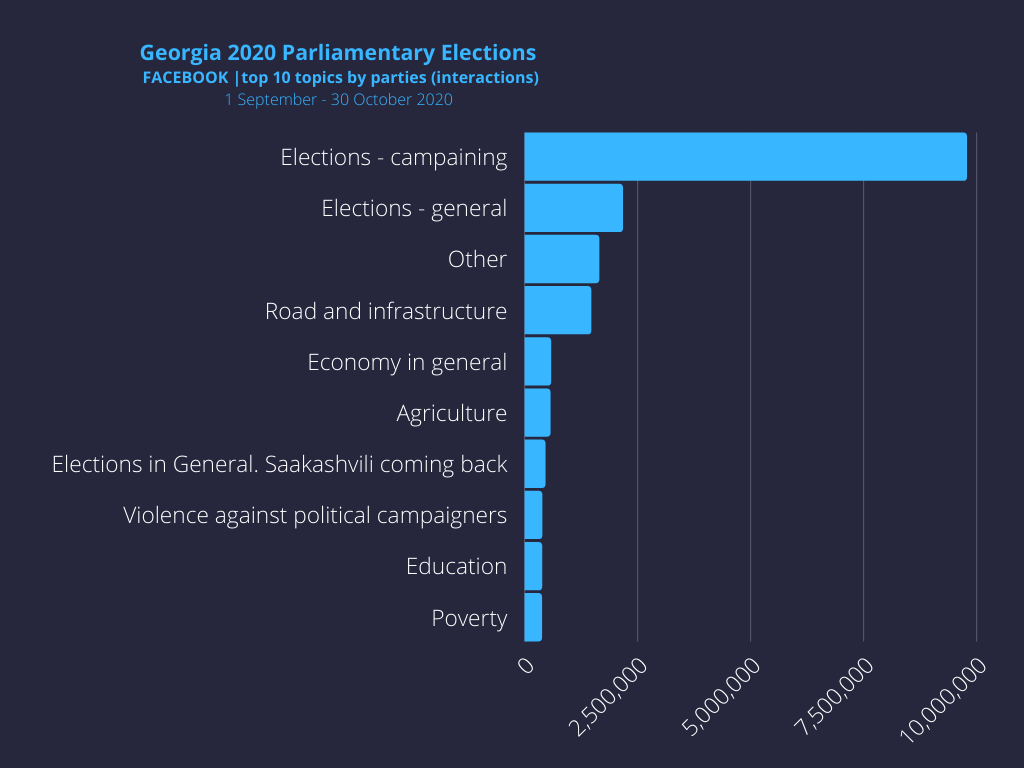 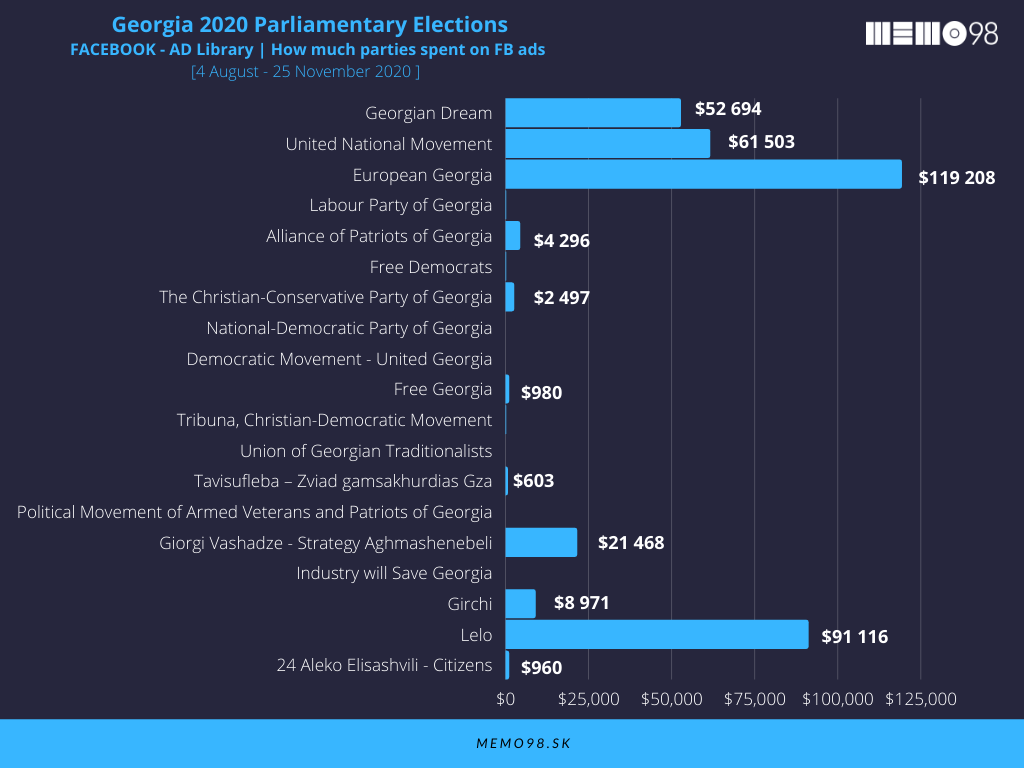