In recent years, the manner of how people receive political messages has changed profoundly also in relation to the growing impact of social media. These changes also brought with them some negative phenomena, such as a substantial increase in unverified, decontextualized and manipulative information, which confirms many individuals’ prejudices and biases. We increasingly realize that thanks to social media, various stakeholders may take advantage of the existing social divisions in the society either by conducting their activity form behind the borders (as witnessed more noticeably for the first time during the US presidential election in 2016) or being active directly in the country where the elections are held. Experience from a number of countries suggests that the risk of abuse increases several-fold in a period of intensified political and social engagement, such as elections. Social media, as well as disinformation, are given an increased share of attention as a potential threat to the integrity of elections. 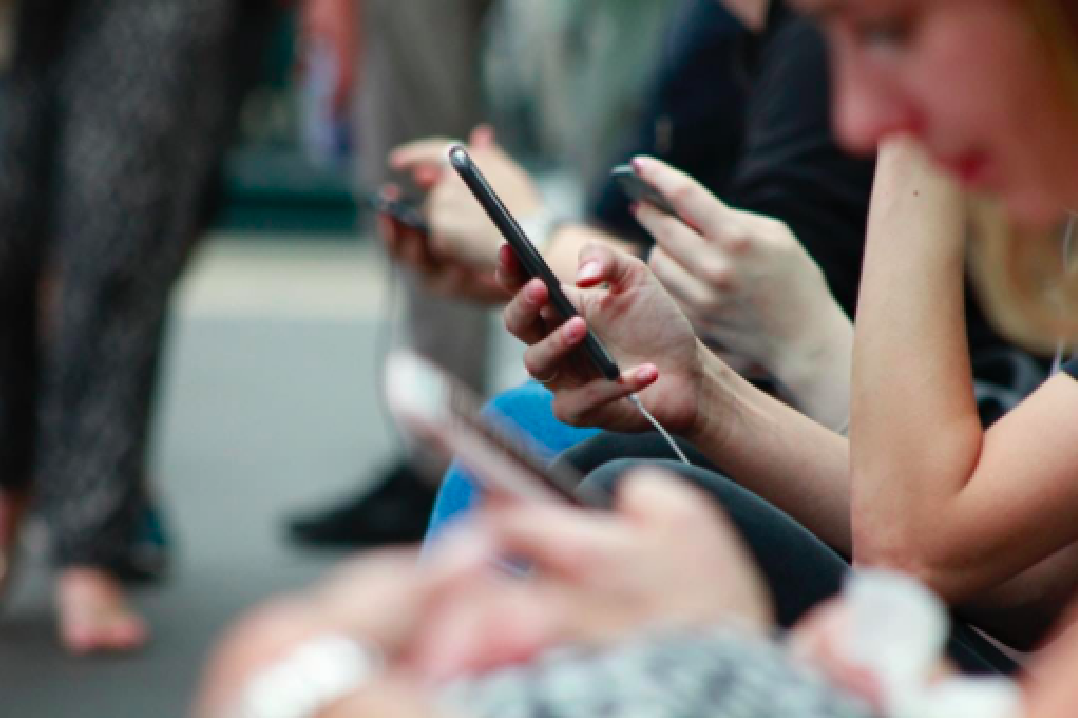 A major increase in the influence of social media also brings with it some advantages – the possibility to obtain information directly from the source in the form and volume that the society only learns to accept and reflect in a meaningful way. During an election campaign, this provides the candidates with the possibility of immediate and direct communication with voters or voter mobilization. Social media have become a very important source of political information and messages in general and all the more during elections – they completely reset the perception of politics, when the filter of traditional media is dropped. These were among the main reasons why we decided to analyze in greater detail during the upcoming Slovak parliamentary elections the manner how various social media networks are used during the campaign: whether to increase and improve voters’ awareness, their mobilization or to spread disinformation or even outright lies.

While the TV still continues to be the primary source of information on politics for most people, the relevance and the role of social media has been growing also in Slovakia. This fact, together with the above-mentioned reasons, inspired us to include also Facebook and Instagram in our election monitoring together with TV channels (that have been monitored in Slovakia since 1998). Our first report analyzes the period starting on the date of the decision on the announcement of the parliamentary elections (5 November 2019) until 26 January 2020 and focuses on Facebook and Instagram. In this report, we monitored the activity (number of posts) as well as interactions (total no. of reactions, comments, and shares) with political parties, their leaders and top candidates. In the following reports which we are planning to issue before the elections, we will present the content analysis of topics and specific narratives, which the respective stakeholders will be using during the campaign. We will publish the results of monitoring the national TV channels, online branches of media as well as the above-mentioned social media. When evaluating the activity of political stakeholders on social media, it should be noted that some parties and candidates boost some of their posts using paid advertising, which has an impact on the post reach, and this may amplify the impression of ‘success’. In one of the following reports, we will also analyze paid political advertising on Facebook.

Among the politicians ranking at the top positions in their candidate lists, Marián Kotleba published the largest number of posts on his official Facebook page (445) followed by Michal Truban and Miroslav Beblavý (both around 300). Other active politicians in terms of the number of published posts also included the chairman of Slovenské hnutie obrody Robert Švec, followed by Jozef Pročko as well as Ľuboš Blaha.

Ľuboš Blaha had the largest number of interactions (the total of reactions, comments, and shares) with his posts (approx. 800 thousand) and it should be noted that in his case the trend is rather long-standing. He is followed by the Prime Minister and leader of the slate for SMER-SD, Peter Pellegrini and Michal Truban (both over 300 thousand interactions), Milan Uhrík and Andrej Kiska.

The largest number of posts have been published by OĽANO (333) on the official Facebook page of this political movement, followed by SPOLU political party, SME Rodina, MOST–HÍD, Sloboda a solidarita (SaS) and Za ľudí. When it comes to interactions, the highest figure was monitored for OĽANO (around 495 thousand), followed by SMER-SD, SME Rodina, SNS and SaS.

Looking at the individual posts, the largest number of interactions was registered for the post by OĽANO “AKTUÁLNE PRED POČIATKOVOU VILOU NA FRANCÚZSKEJ RIVIÉRE“ (Right now outside the villa of ex-minister Počiatek in the French Riviera), which was boosted by OĽANO on Facebook and Instagram with a budget of approx. €4500. Still looking at individual posts by candidates and parties, the post by Andrej Kiska “AHOJ ROBERT“ (Hi, Robert) follows. It was also boosted by the Za ľudí party on Facebook with a budget of roughly €400. The third post in terms of the number of interactions was published by SMER–SD under the name “OTVORENÝ LIST KISKOVI - ODPOVEĎ NA JEHO LIST ROBERTOVI FICOVI AHOJ ANDREJ“ (An open letter to Mr. Kiska – an answer to his letter to Robert Fico) which was boosted by SMER-SD with a budget of up to €6000.

The largest number of Instagram posts in the monitored period was posted by Andrej Danko (130), followed by Miroslav Beblavý (109) and Andrej Kiska (79).

The largest number of Instagram posts were published by the SNS party on its official page (168), followed by SME Rodina, Za ľudí, Slovenské hnutie obrody and SPOLU. When it comes to interactions, the highest number was registered for Za ľudí (almost 29 thousand), followed by OĽANO, SME Rodina, Progresívne Slovensko, and SPOLU.

When looking at the ranking of Instagram posts that obtained the largest number of interactions, the posts by A. Kiska or his political party Za ľudí dominated quite clearly. As many as four posts in the top five were actually posted by A. Kiska. The former president has five posts in the top 10, while two posts were published by Prime Minister P. Pellegrini and M. Truban, B. Kollár and OĽANO posted one each. 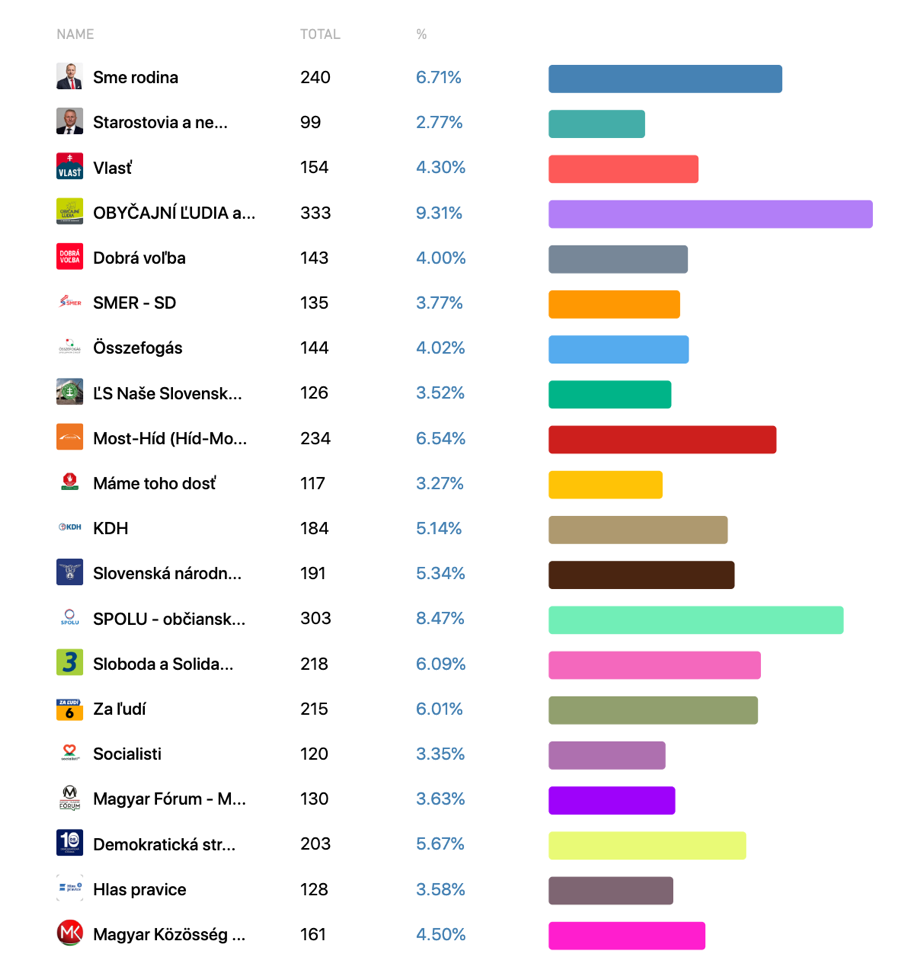 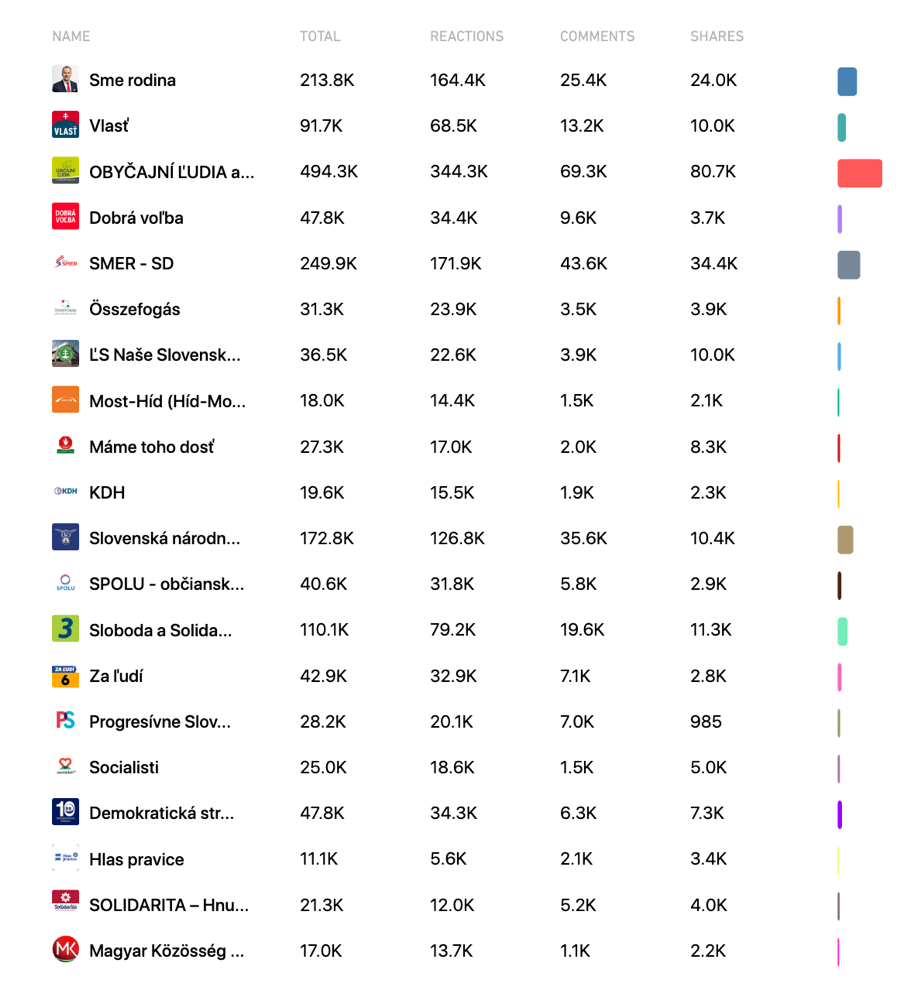 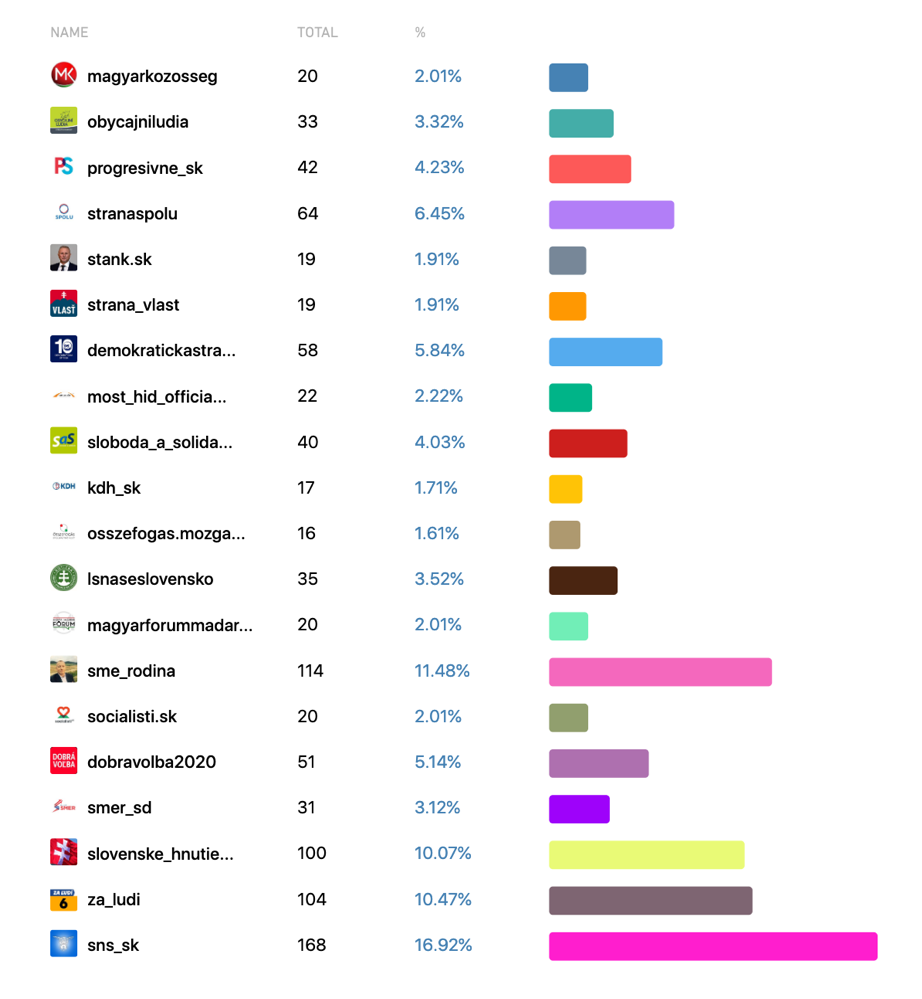 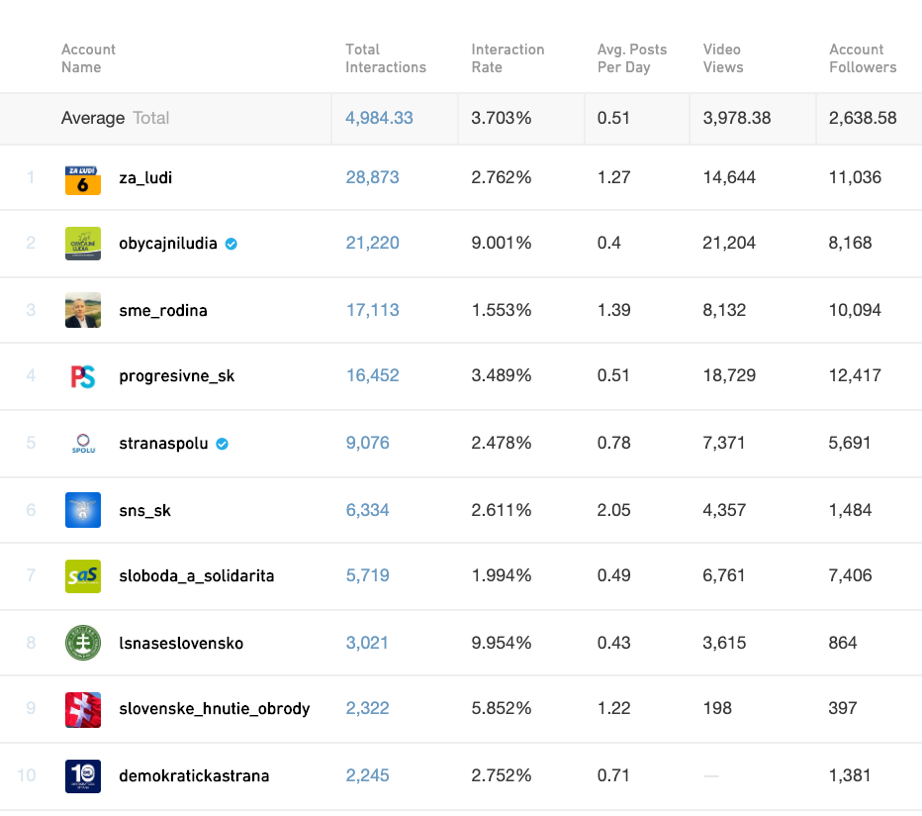 The full report in pdf m98_interim-report_final_english_1